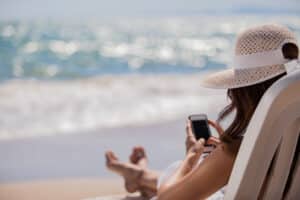 The BT-owned mobile operator EE is to start charging UK customers to use their phones in Europe, having previously said it had no plans to reintroduce roaming costs after the Brexit trade deal struck at Christmas.

New EE customers or those upgrading after mid-July will have to pay £2 a day when they use their phones in 47 European countries from January. EE is the first UK operator to officially reintroduce roaming charges, although O2 has said it will impose an extra “fair use” charge if customers use more than 25GB of data in a month.

Since 2017, mobile networks in EU countries have been banned by law from charging customers extra to use their phones in other member countries. Legislation scrapping roaming charges within the single market was introduced after multiple cases of so-called “bill shock”, in which holidaymakers returned home from foreign breaks to be presented with bills of thousands of pounds for using their phones to connect to the internet while abroad.

“In the aftermath of Brexit, the UK’s biggest mobile providers all said that they had no immediate plans to change their charging models for consumers roaming within the EU,” said Ernest Doku, a mobile expert at Uswitch.com. “It’s hugely disappointing for consumers to see that situation change so quickly. This is ultimately a backwards step for consumers. Unfortunately, when one provider makes such a bold decision it can mean that others follow. Always use hotel and cafe wifi when on holiday where possible.”

In January EE, O2, Three and Vodafone all said they had no plans to reintroduce roaming charges even though the UK’s departure from the EU enabled them to do so.

The trade deal between the UK and the EU states that both sides will encourage mobile operators to have “transparent and reasonable rates” when it comes to roaming.

EE’s new charges will not apply to UK customers visiting the Republic of Ireland. The company said it would use revenues raised from the fees to “support investment into our UK-based customer service and leading UK network”.

EE said customers travelling abroad for longer than short breaks would be able to sign up to a plan to make the charges more affordable.