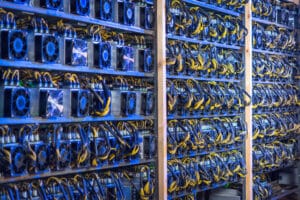 Bitcoin has suffered another volatile drop in value as Beijing intensifies its crackdown on the mining of the world’s largest cryptocurrency.

The digital asset fell back by as much as a tenth to a two-week low after Chinese officials said that they had summoned executives from some of the country’s leading banks to reiterate a recent ban on crypto activity.

It comes amid reports that local authorities are stepping up efforts to close operations to mine bitcoin across China, which has been widely deemed its biggest producer. Last night the currency was down more than 11 per cent, or $3,969.63, at $31,657.36.

Bitcoin was created in 2008 by a secretive software developer using the name Satoshi Nakamoto and has no physical form. Only 21 million coins can be mined and about 18.5 million have been already. They are released when powerful computers solve mathematical puzzles — a process known as mining — which consumes vast amounts of computing energy.

While intended as an alternative currency to pay for goods and services, bitcoin’s main use has been speculative trading. Supporters argue that this is about to change, amid considerable interest among investors and consumers. A perceived shift from the fringes to the mainstream of global finance helped to fuel bitcoin’s exponential rally earlier in the year, but this ran out of steam. Its value, which is prone to turbulent swings and is now about half of the level at which it peaked in April, has been knocked by a series of blows.

China’s recent attempts to halt all mining and trading of bitcoin have caused alarm among investors. The state-backed Global Times newspaper reported that many bitcoin mines across Sichuan province, where they had been prevalent, had been shut down by this weekend. An estimated 90 per cent of mining capacity across the country had been closed, it claimed.

Read more:
Bitcoin falls over 10 per cent as China clamps down on mining