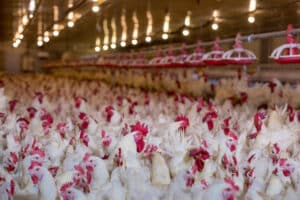 The UK faces shortages of British-produced meat as problems with recruitment continue, the industry has warned.

Brexit and coronavirus have meant many EU workers have returned to their own countries, putting a squeeze on production.

The poultry industry is reporting a 10% fall in the number of birds being slaughtered for meat in recent weeks.

But vegans said the labour shortage could “spark much-needed change”.

About a billion birds are slaughtered, prepared and packed in the UK per year, with the industry heavily reliant on EU nationals, especially for lower-skilled jobs.

But migrants have been returning to their home countries due to Brexit effects including a weaker pound, a trend exacerbated by the coronavirus crisis, the British Poultry Council (BPC) said.

Once they get home, many decide not to return.

Meat producers have been trying to counter these effects by increasing automation and raising wages for workers.

The industry group called on the government to ease post-Brexit immigration rules to make it easier to attract EU workers.

Chief executive Richard Griffiths said: “We generally operate in areas of high local employment so there is a limit to availability of UK workers and there is negligible appetite from UK workers to move from other parts of the country.

“When it comes to non-UK labour – either from the EU or further afield – we have seen reducing numbers willing to come to the UK, the immigration barriers of salary and skill have been raised way beyond what we can manage, and the cost of bringing people is prohibitive.”

Mr Griffiths warned that lack of supply could push up the cost of British meat.

This risks creating a “two-tier” system where the UK imports food produced to lower standards, such as chlorinated chicken from the US, and only the affluent can afford higher quality British meat, the BPC said.

The Department for Environment, Food and Rural Affairs (Defra) said it was working hard to ensure that producers across the UK have the support and workforce that they need.”

“We would like to see the sector highlight the domestic opportunities available. Food and farming businesses will also be able to employ EU nationals with settled or pre-settled status to help meet their labour demand,” it added.

Some of the biggest meat producers are on the verge of telling farmers they do not have the capacity to process their livestock, he said.

While it’s good news that the hospitality industry is opening up as coronavirus restrictions relax, this is putting an added strain on meat production, he said.

However, the Vegan Society said that the situation could have ecological and animal welfare benefits.

It said low or no-meat lifestyles including veganism were becoming more popular as people realised the environmental benefits of eating plant-based proteins.

“Just like the pandemic, which encouraged huge numbers of Brits to cut back on the amount of animal products they’re eating, this labour shortage could potentially spark much needed change, and be a positive outcome for animals and the environment,” a Vegan Society spokeswoman said.

“We hope to see farmers gradually moving away from farming animals to growing crops for human consumption by providing food for the growing vegan population.”