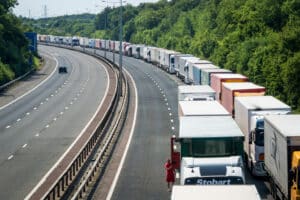 Trade between the UK and the EU fell by almost a quarter in the first three months of the year as Brexit and the Covid-19 crisis disrupted businesses, official figures have revealed.

Total trade in goods between the UK and EU fell by 23.1 per cent compared with a year earlier, the Office for National Statistics said yesterday.

The ONS said that trade with Europe had come under pressure from border disruptions after the Brexit transition period ended.

However, in its report the ONS said that disruption from the Covid-19 crisis and a slowdown in the global economy meant it was “too early to assess the extent to which the transition period reflects short-term trade disruption or longer-term supply chain adjustments”.

Although Britain’s exports to the EU fell by a record 43.2 per cent in January, the figures suggest that companies have overcome the worst of the disruption.

Businesses on both sides of the Channel suffered severe disruption at the start of the year as they grappled with new customs paperwork, but goods exports to the EU rose by 8.6 per cent to £12.7 billion in March, which is close to the £13.7 billion recorded in December, before Britain’s departure from the single market.

The ONS said that of those businesses that had reported challenges at the end of February, the main problem was given as the end of the EU transition period. This had risen from mid-December 2020. In contrast, the number reporting the coronavirus as their main challenge fell over the same period.

Exports to Ireland suffered the sharpest decline among the UK’s top trading partners. Exports of goods fell by £1 billion, or 47.3 per cent, between December and January.

Imports from Ireland fell by £100 million, or 4.4 per cent. Trade with Germany, France and the Netherlands also suffered.

Germany is Britain’s largest EU trading partner, but since April 2019 imports from Germany. As of the second quarter of last year, the UK has imported more from China than it has from Germany, the ONS said.

Read more:
Britain’s trade with EU fell by a quarter after Brexit transition