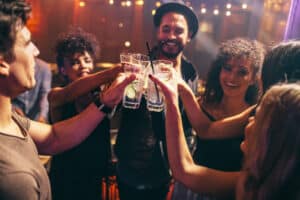 Holding mass events without masks and social distancing can be as safe as going to a restaurant or shopping centre, government trials suggest.

Preliminary data from the events research programme is understood to have found that with screening, improved ventilation and other mitigating factors the risk of virus transmission can be significantly reduced, reducing fears that sports matches and concerts could cause big outbreaks.

The results will boost hopes that the end of restrictions can go ahead as planned on June 21 despite the spread of the Indian variant.

They are likely to strengthen the case for requiring “Covid-status certification” for such events to prove that those attending are at lower risk of being infectious.

The results will be forwarded to ministers in the coming days before a decision on further easing of lockdown measures due next month.

While the research programme took place before concerns over the spread of the Indian variant, it is likely to form a key plank of the government’s plans for the reopening of society.

A government source said the results from the trials had been encouraging and further test events were planned for the coming weeks. “We are still waiting for the final bits of data but the results so far have been very encouraging,” the source said.

“It will help make the case that these large events are not inherently more risky than other parts of the hospitality sector. It shows that there are things that you can do to make these settings as safe as other daily activities.

“It is true that they are not going to be 100 per cent safe but you can lower the risk to a reasonable level.”

Another source stressed that the events needed much higher levels of organisation than those before the pandemic, with strict requirements that participants prove they had recently tested negative, reduced capacity and protocols about entering venues to minimise mixing. However, the results suggest as long as they are adhered to, risk of outbreaks can be kept low.

Initial results earlier this month demonstrated that such measures were feasible. Ministers are starting to see results from tests five days after the events, which show how many people caught the virus during the pilots.

The events included the Brit Awards in London, the World Snooker Championship in Sheffield and a business conference and nightclub event in Liverpool. Three matches at Wembley were included to test crowd management. There were indoor and outdoor events, most of which were seated, but there was a club night where crowds mixed. None required masks or for people to remain a metre apart.

Scientists hoped this would show which types of event and behaviour were mostly likely to spread the virus. People were monitored by CCTV and wore devices that showed how many others they came into contact with, whether they shook hands or hugged, and how far apart they stood.

Behavioural experts overseeing the tests warned ministers that confidence in the government’s handling of the pandemic would be badly harmed if the return of events led to fresh outbreaks. A failure to ban mass events in March last year was blamed for worsening Britain’s first wave.

Michael Gove, the Cabinet Office minister, is leading a review of the evidence for Covid-status certification that is due to report before June 21. Under the present plans, proof of a recent negative test, vaccination or antibody status would be required before people were permitted entry to sectors of the economy such as concerts, sporting events and nightclubs. Ministers do not plan to require certification for entry to pubs and restaurants.