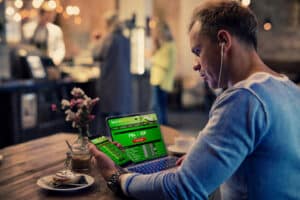 Regular gamblers were more than six times more likely to bet online during the pandemic than before the health crisis, researchers have found.

A study by Bristol University found that young male gamblers were particularly prone to a flutter online during the first lockdown.

The research, published in the Journal of Gambling Studies, revealed that online gambling, including casino and bingo games, increased sixfold among regular punters during the crisis.

During the first lockdown the researchers questioned 2,600 young adults who had been asked similar questions before the pandemic as part of the Children of the 90s study of more than 14,000 people born in the Avon area in 1991 and 1992.

The rise in online gambling was not limited to regular gamblers. Occasional punters were found to be more than twice as likely to place a bet online than before the pandemic.

Alan Emond, the lead author and an emeritus professor at the University of Bristol Medical School, said that the research gave a unique insight into how behaviour changed during lockdown.

“The findings reveal that although many forms of gambling were restricted, a minority of regular gamblers significantly increased their gambling and betting online,” he said. “As with so many repercussions of the pandemic, inequalities have been exacerbated and particularly vulnerable groups were worse affected.”

The study found that those with financial problems before the pandemic were more likely to gamble during lockdown. Men were three times more likely than women to have a bet more than once a week. The research also found that drinking more than three pints of beer at least once a week was linked to regular gambling.

Emond said: “The strong link between binge drinking and regular gambling is of particular concern. With the wider availability of gambling through different online channels, vulnerable groups could get caught in a destructive cycle.”

Emond added that “a public health approach” was needed to minimise the dangers of gambling.

The study builds on the growing research into gambling habits during the pandemic. Experts from the universities of Glasgow and Stirling found in March that one in six gamblers started a new form of betting during the first lockdown, with one in three placing bets more frequently.

Agnes Nairn, co-author of the Bristol study, said: “As gambling habits shift online, vulnerable groups including children and adults who drink heavily may be more easily sucked into these channels. Stricter regulation is needed in this growing field to protect unwitting consumers.”