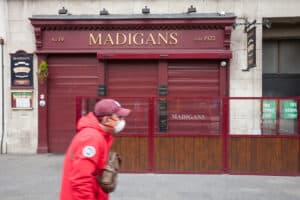 Monday sees another milestone in the reopening of the economy: people in most of the UK will be able to go to a bar or restaurant and eat indoors.

But some favourite haunts will no longer be there: over the last year, thousands of establishments have closed, latest surveys indicate.

Across Britain, there are 9.7% fewer restaurants to choose from, compared with before the pandemic.

And mid-market “casual dining” venues have fallen by 19.4%.

The data in the latest Market Recovery Monitor from CGA and AlixPartners suggests that while many pubs and bars have also struggled to survive the pandemic, it is restaurants that have fared worst.

That includes places such as Oskar Ali’s in Newport in Wales. Oskar and his wife opened Falafilo Island, serving grilled meats and vegetables and falafel, in August 2018.

They invested thousands of pounds to set up the business, transforming the dark interior with a cheerful yellow ceiling and tree-patterned walls.

“We had so many lovely customers, but corona just hit us so hard, we had to close,” Oskar told BBC Radio 4’s The Food Programme.

They hoped a busy Christmas might save them, but Oskar’s wife caught Covid and they had to isolate for two weeks.

“Then it was January and we thought: we should just close,” he says. “We couldn’t survive, even with the grants they gave.”

Oskar, a computer science graduate, now has thousands of pounds of debt and is looking for other work.

CGA and AlixPartners measured the impact of the last 13 months on pubs and restaurants that hold a licence to serve alcohol.

Looking at the net number of venues, once all closures and new openings were taken into account, they found pubs across Britain fared slightly better than the restaurant sector.

The number of pubs serving food has fallen by 4.2%. Bars and pubs that only serve drinks fell by 5.2%.

But on top of the near-20% fall in casual dining outlets, bar-restaurants, which make up a smaller part of the overall dining market, fell by 9.6%.

General restaurants, which are the largest dining out category, are down 10.2%.

“The main challenge for restaurants, in comparison to pubs, is that the restaurants all tend to be leased premises – they all have landlords and rent to pay,” says Graeme Smith, managing director of AlixPartners.

“When their revenues stopped, their rental bills continued to build up, unless they managed to reach an agreement with their landlord.

“Unfortunately, with the burn of costs of rent and other costs of business, for a number of restaurants, that was simply too much to keep going through the period of closure.”

And while restaurants that belong to larger chains were sometimes able to fall back on the group financially, or negotiate agreements with landlords across the business, independent operators have found it harder to survive.

The restaurant sector was already shrinking before the pandemic, but the net losses between 2017 and 2019 were between 0.9% and 2.2% a year, according to CGA AlixPartners data.

Many of those earlier losses were in crowded sectors such as burger bars. But losses over the past year have included businesses with otherwise promising futures.

Hendersons in Edinburgh was founded in the 1960s, and as vegetarian and vegan food became more fashionable, it had expanded to two new sites in the city.

Before the pandemic hit, it was trading strongly thanks to loyal customers and Edinburgh’s throngs of summer visitors. But it relied completely on in-person footfall, says Janet Home, the third generation of the family to be involved in managing the business.

“We didn’t have anything set up, the website wasn’t set up for online delivery, there were so many processes we needed to go through,” says Janet.

“With all the competition out there, there was no way we could cover all the running costs of the business.”

In July, faced with redundancy payments for 35 staff, they reached breaking point.

“It was a soul-destroying decision the family had to come to, says Janet. “We knew it was game over.”

Looking back she has no doubt it was the right decision. They would need to run at 60-75% capacity to cover their costs, which is difficult with social distancing rules still in place.

“Even if we were in a position to reopen now, the tourists are going to take time to come back, the offices are not at capacity, [some] students are working from home.”

The Local Data Company, which monitors changes to property use across England, Scotland and Wales, says the biggest net losses were in American and Italian restaurants.

But some categories saw a net gain in the number of outlets, according to their data, including vegan and Japanese restaurants.

Graeme Smith from AlixPartners says he expects the churn to continue in the next few months.

There’s a “cliff edge” at the end of June for many restaurants, he points out, because after that point landlords can demand unpaid rents again, as the rules to support the sector are lifted. That could prompt a new wave of closures as big as the number we’ve seen already he warns.

But pent-up demand could encourage new openings too.

“Landlords will be keen to get new tenants into their sites,” points out Mr Smith. “And restaurateurs are naturally optimistic people. When you see a restaurant closed, it doesn’t stay closed for long.”

Tim Hall is one of the founders of a small sourdough pizza chain, Three Joes – one of the businesses poised to capitalise on a bounce-back in demand.

Last year, they bought another small chain, The Stable, taking them from three to 12 sites, mostly in south-western England.

“We’re quite nervous about what’s going to happen,” he says. “We’ve taken a big risk.”

The new restaurants are all either waterside or market-square sites, most with outdoor spaces, that he thinks will appeal to customers post-Covid. Crucially, none rely on “office block” trade.

“I don’t think overall the trend for people to eat out more is going to be damaged in the medium term,” he says. “And in the short term, it will accelerate hugely.

“We’re anticipating a summer like no other. Apart from anything else, people are trapped in England, they want to spend their savings and enjoy themselves.”

Read more:
A tenth of Britain’s restaurants have been lost during pandemic