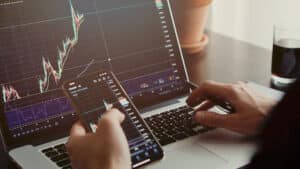 It is understandable why governments around the world send out massive stimulus packages to their citizens. With the loss of jobs and very little amounts of money in savings, the governments need to find a way for its people to survive. However, this is not a sustainable solution for any economy because consumer inflation often follows suit.

The onset of the Covid-19 pandemic in 2020 has resulted in the shrinking of the global economy; and it does not seem like things will be getting back to ‘normal’ anytime soon. People have been losing their jobs as governments continue to encourage people to avoid unnecessary travel. In some countries such as the US, the government bailed out struggling businesses and even issued ‘stimulus packages’ which consisted of cash meant to cushion citizens from effects of the pandemic. The trillions of dollars that were spent on stimulus spending has pretty much resulted in inflation, which means that the value of the dollar fell drastically. The domino effect has been felt whereby debts owed by the US are now over 50% of the GDP.

Desperation, coupled with unstable economies has revealed that people are increasingly trusting digital assets rather than fiat currency. It initially began as a joke but many US citizens are spending their stimulus checks on digital assets with the hope of making a fortune. Does this mean that the US Dollar will eventually be sidelined in favor of cryptocurrency?

As was the case leading up to the 2008 financial crisis, the prices of homes are skyrocketing. Inflation always prompts investors to hedge in the housing market which means that it becomes increasingly harder to find a home for sale.

When this happens, central banks around the world are forced to lower their short-term interest rates and this directly affects long-term mortgages interest rates as well.

Due to the fact that the Covid-19 pandemic has curtailed movement and physical interaction all around the world, many people have been confined to using social media to stay in touch. Television and social media have also become some of the most popular and easily accessible sources of news.  This means that millions of users access social media sites on a daily basis in search of information and entertainment. Social media platforms are steadily becoming fully functional search engines. Marketers already know this and perhaps it is the reason why many companies are opting out of traditional means of advertisement such as billboards and newspaper ads in favor of digital ads.

Global smartphone penetration continues to surge to new heights each year. 2020 and 2021 are no exceptions to this digital revolution. In addition to this, mobile phone manufacturers are still pushing the limits of what a person can do using just a smartphone and a reliable internet connection. Performing transactions around banking services and investment using mobile devices has gradually become commonplace.

This is perhaps one of the main reasons why there has been exponential growth in the digital assets sector. A number of Asian countries such as China and South Korea are leading in the list of the most digitized economies in the world. Some European countries such as Germany and the UK have also taken steps to foster the growth of this industry. It is almost impossible to believe that the USA is lagging behind here due to the government’s slow acceptance of innovation surrounding digital assets. There has certainly been a battle of generational beliefs when it comes to trusting digital assets versus fiat currency and commodities.

It appears that retail and corporate investors are much keener on investing in commodities rather than fiat currencies such as the USD, GBP and Euro. While the latter are still a legitimate and reliable store of value, commodities have now become a safe haven as they offer more opportunities for investors to profit. When it comes to commodities, trading volumes for both swing traders and intraday traders have gradually increased over time. Becoming a trader is quite a straightforward process now as all you have to do is visit TradingGuide and finding out which broker would be the most convenient and reliable to use.

As we had mentioned, the interest in digital assets such Bitcoin and Dogecoin have multiplied exponentially in value over recent months. With inflation and uncertainty surrounding the world’s strongest currencies such as the dollar, many have now turned their attention to digital currencies. The only catch is that you have to get a good entry price, otherwise it is very easy to lose all your money when the price goes against you.