VEHICLE SALES surged in April from the extremely low base a year ago when Luzon was placed under the strictest form of lockdown, according to industry data.

A joint report from the Chamber of Automotive Manufacturers of the Philippines, Inc. (CAMPI) and Truck Manufacturers Association (TMA) showed 17,843 vehicles were sold in April, 13,315% higher than the 133 sold during the same month in 2020.

In a statement, CAMPI President Rommel R. Gutierrez said this was a “record year-on-year sales increase” since the coronavirus pandemic began last year. 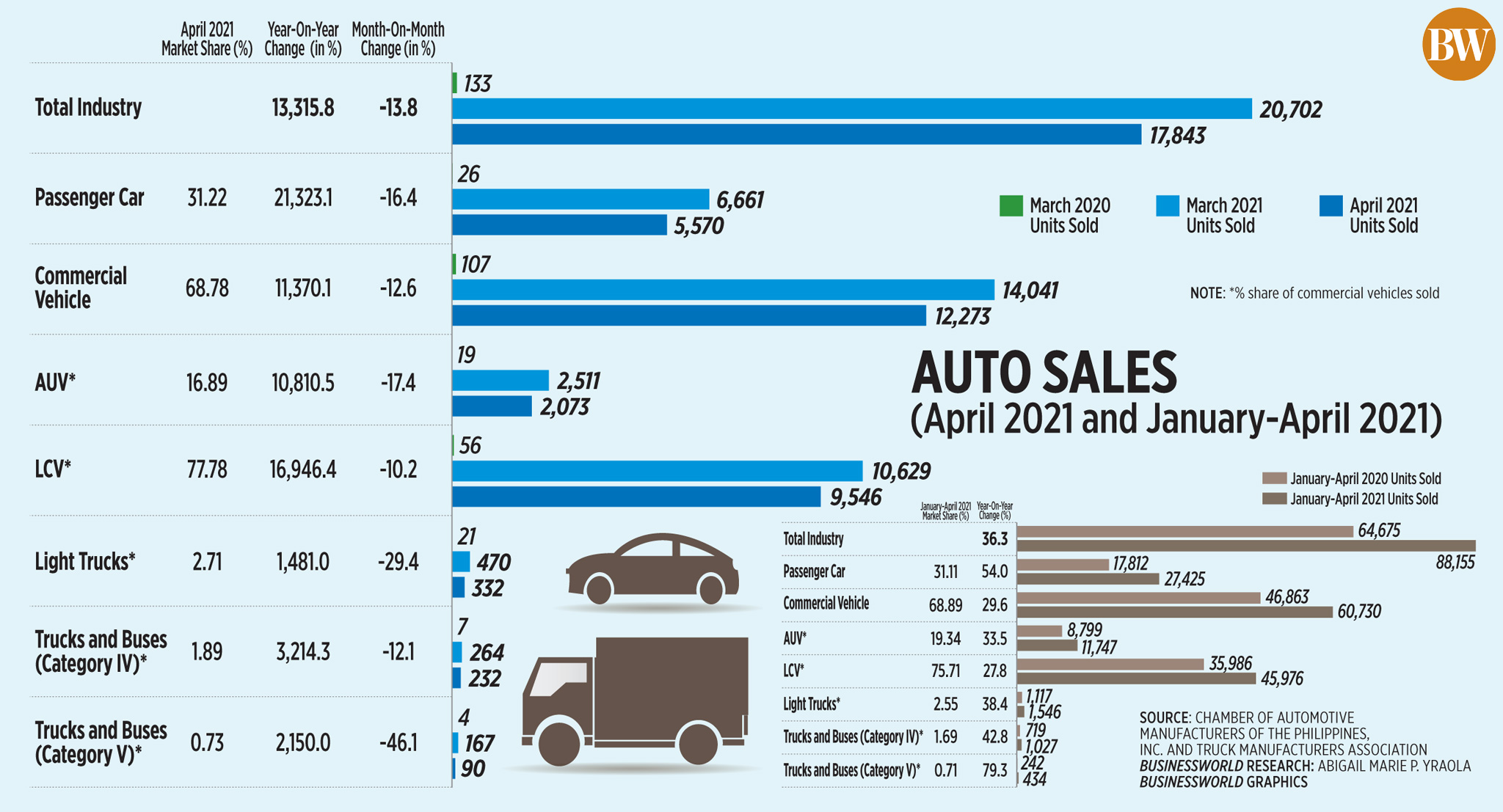 To recall, auto sales plunged to a record low level in April 2020 as nearly all economic activity was halted during the imposition of an enhanced community quarantine (ECQ) in Luzon.

However, April sales were still 13.8% lower than the 20,702 units sold in March, which Mr. Gutierrez said was mainly due to the reimposition of tighter quarantine measures.

Since late March, Metro Manila and adjacent provinces have been under a modified ECQ (MECQ) to curb a spike in coronavirus disease 2019 (COVID-19) infections. MECQ is scheduled to be lifted on May 14.

“Additionally, tighter bank lending continues to dampen the demand for consumer spending especially for big-ticket items like auto amid the pandemic. The additional deposit due to safeguard measure is burdensome in itself to consumers and industry alike,” Mr. Gutierrez said.

Car companies have started collecting deposits from buyers of imported cars, after the Department of Trade and Industry (DTI) imposed provisional safeguard duties in order to protect local jobs. The DTI had found a link between a decline in local industry employment and an import surge, based on a petition from an auto parts labor group.

Despite the disruption caused by the reimposition of MECQ in the capital region, the auto industry’s year-to-date sales appear to show signs of improvement.

So far this year, Toyota Motors Philippines Corp. (TMP) continued to have the largest market share at 47.35%, with 41,737 units sold.

Mr. Gutierrez earlier this year said that he expects the car industry to reach pre-pandemic sales levels as late as 2023. Recovery would be achievable if there are certainties in the market, consistent government policies, and widespread inoculation against COVID-19, he said.

The best-case scenario for the industry in 2021 is a 30-35% sales growth, Mr. Gutierrez said, but added that provisional duties could lower growth to 20-25% compared with last year’s figure. — A.L.Balinbin