THE CENTRAL BANK is widely expected to keep policy unchanged when it announces its decision this week, amid uncertainty over the pandemic and its impact on economic recovery, a BusinessWorld poll of analysts showed.

A BusinessWorld poll held last week showed 15 out of 17 analysts are of the view that the Bangko Sentral ng Pilipinas (BSP) will maintain its overnight reverse repurchase rate or the key policy rate at a record low of 2%.

Analysts said the scope for interest rate adjustment is limited as inflation continued to exceed the annual target and supply issues persisted. 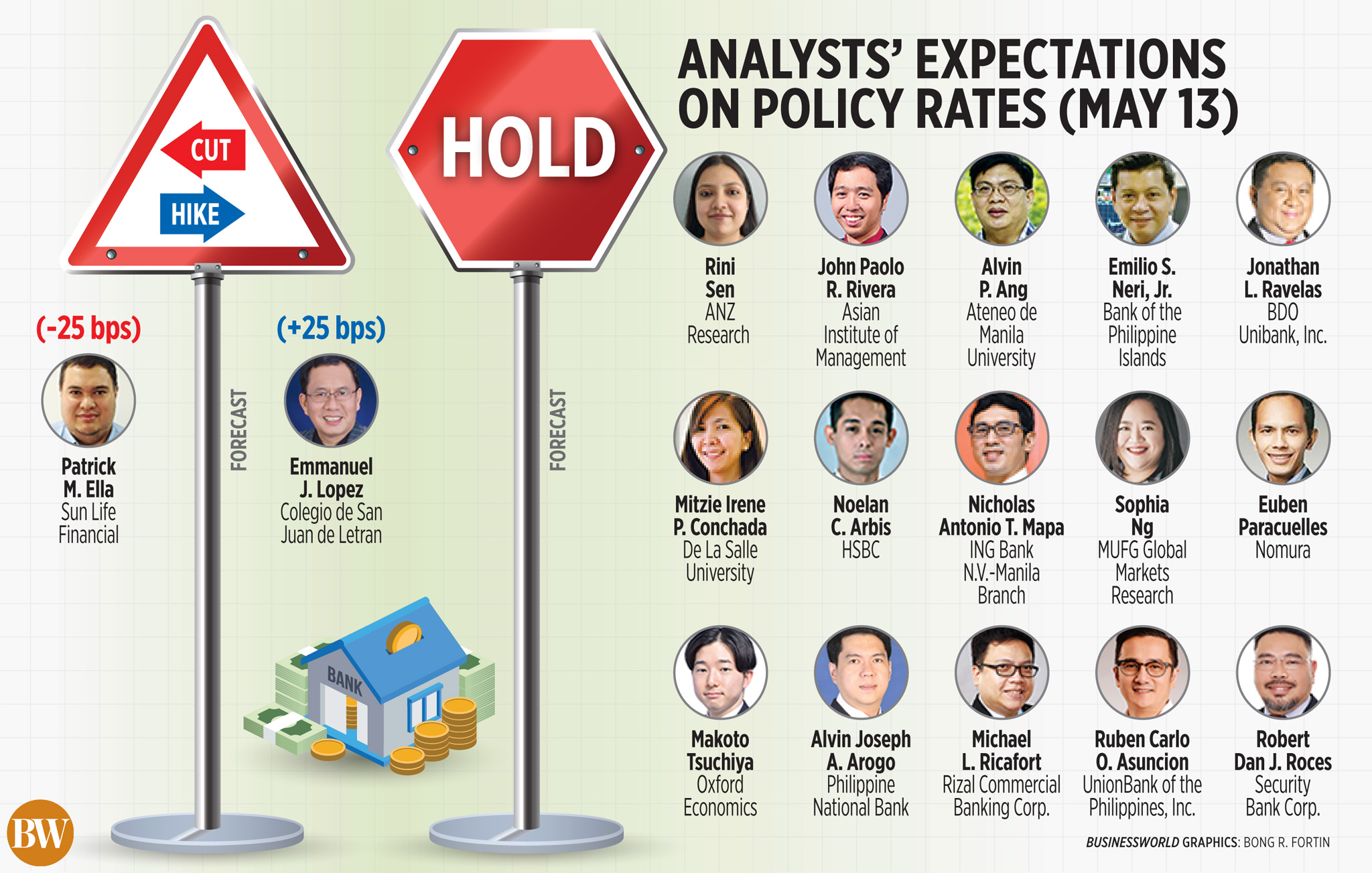 “The onus is then on fiscal policy to do most of the heavy lifting to support the economy. More fiscal stimulus is expected when the Bayanihan III bill is eventually passed by Congress,” Mitsubishi UFJ Group Global Research analyst Sophia Ng said.

Inflation was steady at 4.5% for the second straight month in April, according to the Philippine Statistics Authority (PSA). However, it still marked the fourth straight month of inflation exceeding the central bank’s 2-4% annual target.

The BSP expects inflation to quicken by 4.2% this year from 2.6% in 2020, mainly due to supply disruptions in meat products caused by the African Swine Fever (ASF) outbreak and the uptick in global oil prices.

The House of Representatives is currently deliberating House Bill No. 8628 or the Bayanihan to Arise as One Act, which may become the country’s third and largest COVID stimulus package as it allocates P420 billion in subsidies to affected Filipino families and businesses. The measure is pending at the House Committee on Appropriations.

The BSP’s overnight lending and deposit rates are also at all-time lows of 2.5% and 1.5%, respectively.

“For now, we believe more regulatory policies and liquidity support will be warranted by the central bank in place of any action on the rates side,” Ms. Sen said.

“They may be forced to hike before the end of the year, however, if core inflation threatens to exceed its full-year inflation target this year,” Mr. Neri said.

He said there should be room to assess whether there are meaningful benefits in having record-low interest rates compared to a “sustainable level of, say 3%” in order for the central bank to do its duty of keeping price stability.

“Financial institutions have limited appetite to lend at a lower lending rate relative to pre-pandemic rates knowing the environment remains very risky. No wonder nonperforming loans continue to rise even with interest rates now 2.5% lower than the inflation rate,” he said.

“Other costs to extremely low rates are the risk of asset, especially property bubbles, widening inequality given that the lower income classes have more limited access to credit, hoarding of commodities, excessive risk taking and mispricing of risk, fragility of financial institution due to negative real yields, among others,” Mr. Neri added.

Despite record low policy rates, lending has been tepid in the previous months and even shrank starting December 2020. Preliminary data from the central bank showed outstanding loans by big banks declined for the third straight month in February by 2.7%, as lenders remained risk-averse and borrowers shied away from credit during the crisis.

In the meantime, the Monetary Board will likely remain accommodative as it takes into account the first-quarter gross domestic product (GDP) data, UnionBank of the Philippines, Inc. Chief Economist Ruben Carlo O. Asuncion said.

“We think that the economy is still limping from last year’s record economic slump. Furthermore, the aggravation to first-quarter economic growth prospects brought by the recent restrictions due to March’s infection resurgence is undeniable and will definitely impact the GDP print,” he said.

First-quarter GDP data will be out on Tuesday (May 11).

Economic managers expect the economy to grow by 6.5% to 7.5% this year following the record 9.6% contraction last year. However, multilateral lenders and think tanks have warned the country of its “fragile” recovery trajectory due to the infection surge and slow vaccination.

Sun Life Financial Economist Patrick M. Ella said he is betting on a 25-basis-point (bps) rate cut to provide further support for the economy amid the prolonged pandemic.

“There is no strong fiscal stimulus save for a new budget that was passed early and will see higher spending. We aren’t seeing income assistance from the fiscal front as seen in other economies, so BSP has no choice but to continue to support with monetary policy action,” Mr. Ella said.

Based on the International Monetary Fund’s policy tracker as of mid-April, the central bank’s two previous stimulus packages represent 2.9% of 2020 GDP while credit guarantees and standby financing amount to 0.8% of the 2020 GDP.

On the other hand, Colegio de San Juan de Letran Graduate School Dean Emmanuel J. Lopez is expecting a 25-bp rate hike as a “precautionary move” by the Monetary Board.

“It is a safe move to safeguard what could be an abrupt movement in the prices of commodities as influenced by the enhanced community quarantine that has negatively affected price movements,” Mr. Lopez said.

The Monetary Board meeting is scheduled on Thursday, although the BSP said this could be moved to another day within the week as it may coincide with the Eid’l Fitr holiday.