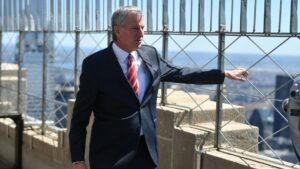 The mayor of New York has called 80,000 municipal workers back to their desks in an effort to spur the recovery of a city hollowed out by the pandemic.

Bill de Blasio’s order to return to the office after 14 months at home prompted protests outside City Hall over the weekend from employees who said they were being asked to put themselves in harm’s way for the sake of the economy.

As the mayor spoke of reopening the city the governors of New York, New Jersey and Connecticut issued a joint statement announcing that restrictions on the number of people allowed in restaurants, shops, offices, museums and theatres would be lifted on May 19.

“All the arrows are pointing in the right direction,” said Andrew Cuomo, the governor of New York State.

On May 17, two days before the city becomes “fully open, subject to six feet”, as Cuomo put it, the subway will resume 24-hour operations, the governor said. Besides easing restrictions on restaurants, barber shops and beauty parlours, limits on outdoor gatherings will be relaxed from 250 people to five hundred. Events venues, which are now operating at 10 per cent capacity, will be allowed to fill 30 per cent of their seats, and outdoor sports stadiums will be able to fill a third of their stands.

De Blasio said that office workers in the city were being ordered back as part of a larger effort to revive New York. “We have to take it to the next level,” he said. “We have to really spur a strong recovery.”

The employees who had been doing out their jobs from home made up about a fifth of the workforce, he said. The rest had remained at their posts throughout the pandemic. “It’s time for the folks who worked in offices to come back,” he said. He said that the return had gone smoothly yesterday, in spite of suggestions from the leading public workers’ union that the recall had been haphazard and poorly managed. “City hall is abuzz today,” he said. “It’s a great feeling.”

The emptying of midtown and the financial district has had a knock-on impact on the shops and restaurants that once served them, as has the long absence of tourists.

As of yesterday, 6.6 million vaccine doses had been administered in the city and, over seven days, hospitalisations have fallen slowly but steadily. In another hopeful sign for midtown Manhattan, some clothes shops have reported a rush on dresses, sandals and blouses, as well as men’s suits and trousers without elasticated waistbands.

“Dress shoes, blazers, slacks, it’s all going,” an unnamed employee of Saks Fifth Avenue told the New York Post. Some of his clients said they no longer fitted their smart clothes.

“Some of the men I’ve been fitting for suits grumble about it,” he said. They say: “I don’t want to go back to the office. I’ve gotten so comfortable in a button-down and boxers.”

Read more:
New York mayor tells workers to get back to the office