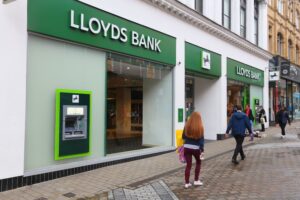 Earnings at Lloyds Banking Group have rebounded, with a forecast-beating £1.9bn in pre-tax profits for the first quarter, as the lender released cash that had been earmarked for potential loan defaults triggered by the pandemic.

The upbeat results came as other European lenders reported strong quarterly trading. Profits at Santander jumped to nearly five times their level last year after the Spanish bank avoided further loan loss charges, while Deutsche Bank recorded its highest quarterly profit since 2014 after a bumper performance by its investment bank.

Lloyds released £459m from a cash pile meant to cover bad debts in the first three months of the year, in stark contrast to the £1.4bn charge it took at the start of the outbreak in 2020. The banking group put aside £4.2bn last year amid fears that business and personal customers would fail to keep up with their loan payments.

The latest move signalled cautious confidence about the economic outlook after the success of the UK’s vaccine programme, which has helped the government ease restrictions after months of lockdown.

Pre-tax profits for the three months to March were ahead of forecasts and upsignificantly from the £74m reported for the same period last year, when loan loss charges almost wiped out earnings.

However, the outgoing chief executive, António Horta-Osório, struck a cautious tone in his final set of results at the institution he has led for a decade. “The coronavirus pandemic continues to have a significant impact on people, businesses and communities in the UK and around the world,” he said. “While we are seeing positive signs, notably the progress of the vaccine rollout and the emergence from lockdown restrictions, the outlook remains uncertain.”

Lloyds’ finance chief, William Chalmers, said that while the bank was not forecasting another UK lockdown this year, its economic modelling did assume “some form of modest third wave” of Covid-19 infections.

The lender also predicts a slowdown in the housebuying boom, which has led to a £6bn rise in mortgage balances in the first quarter and helped offset low interest rates that dragged on revenues, which fell 7% to £3.7bn.

While the withdrawal of the stamp duty holiday this summer is expected to reduce demand, the lender expects the so-called race for space – where customers prioritise larger homes and gardens amid a surge in home working – to continue to drive mortgage borrowing into the second half of the year.

Lloyds was likely to take advantage of its homeworking success, Chalmers said, adding that productivity had not been hampered by lockdowns. He said the bank would be “learning by doing” as it rolled out hybrid working plans in the coming months and would build an app so colleagues could book rooms when they choose to come into the office.

Lloyds shares were up nearly 4.5% at 45p each on Wednesday morning.

Horta-Osório is leaving after 10 years at the helm, having joined in 2011 with the task of bringing the bank back into private hands after its £20.3bn government bailout in 2008.

The outgoing chief executive will be replaced by the HSBC banker Charlie Nunn, who will take over on 16 August. The chief financial officer, William Chalmers, will act as chief executive in the interim.

In a farewell roundup of his highs and lows at Lloyds, Horta-Osório, who will be taking over as chair of Credit Suisse on 1 May, said one of his proudest moments was the moment he learned Lloyds was back in private hands in May 2017.

“We were told by Treasury, like, it was 4.14pm, that they had sold their final shares, and we quickly put everybody online, and I congratulated the teams for having returned taxpayers’ money back and some more. We were the only bank in the UK to have done that,” he said.

That contrasted with the start of his term, when he took time off due to exhaustion within months of joining the bank. “Those were very bad days,” the chief executive recalled.

But Horta-Osório said the banking industry was in a much better position, even in the middle of a pandemic. “I can tell you, very frankly, I think the sector is in a very different position: much stronger, much more focused on customers, and with really strong balance sheets that will enable the banks to keep supporting the economy as we will go through these difficult few months ahead.”