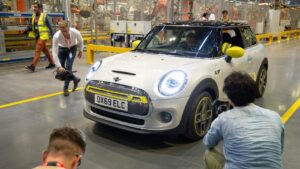 Thousands more British car workers are going to be stood down from the end of this week as Mini became the latest automotive manufacturer to be affected by the worldwide shortage of computer chips.

BMW’s Mini plant at Cowley in Oxford is to be shut down from tonight and does not plan to reopen again until next Thursday.

A spokesman for the company said it hoped to keep the disruption down to just the three working days.

“It will be a total shutdown but we are aiming for normal service to return next week,” the official said. BMW employs 4,500 people at Cowley and its sister supply plant in Swindon.

The news follows the decision by Jaguar Land Rover to temporarily halt production at the Range Rover Evoque factory at Halewood on Merseyside and the Jaguar factory in the West Midlands. A total of 6,000 workers have been affected.

Ford has had to follow suit, ordering the temporary closure of its Dagenham diesel engine production plant and its Halewood gearbox facility. A total of 1,900 workers have been affected.

Nissan in Sunderland previously reported adjustments in production schedules because of supply shortages. Honda, which is in the process of closing its Swindon plant for good, has said it had to stop production because of shortages.

Carmakers around the globe have been warning about the impact of shortages of semiconductors for months.

The automotive market competes with the electronics industry for microchips. During the pandemic much semiconductor production was diverted to feed the boom in sales of smartphones, tablets, personal computers and gaming devices.

For carmakers, the shortages are believed to be most acute for the chips used in in-car measuring tools.

As they began to lift production after the initial lockdowns, they found that the Chinese car industry, the world’s largest, emerged from the pandemic faster than others and had swept up a lot of the available stock.

The Mini car plant is one of Britain’s largest, typically producing in excess of 200,000 units a year in normal times. Last year it started producing the Mini Electric.

Britain’s car production is still running at nearly a quarter below normal despite a sharp year-on-year bounce back in the numbers after factories were shut down at this time in 2020.

The figures also show how fast UK carmakers are transitioning to lower-emission vehicles. More than one fifth of cars coming off assembly lines are either pure-battery electric or hybrid models.

March output figures show that the UK produced 319,000 cars. That is 46 per cent above the same figure in March 2020 when the industry went into lockdown. It is, however, nearly 23 per cent down on the five-year production average.

The backlash against diesel, the uncertainty around post-Brexit working arrangements and logistics issues and then the pandemic have all affected Britain’s car factories in recent times.