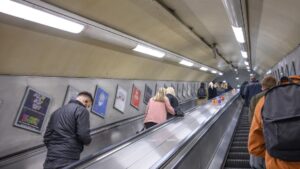 The Bank of England is likely to upgrade its GDP growth forecast for the UK to 7 per cent next week amid signs that the economy is recovering far more rapidly than expected.

Weekly real-time data that Jefferies is tracking shows that economic activity is back at levels last seen when the pandemic started, even surpassing last summer after the economy reopened. More people are using public transport and are on the roads than at any point in the past 13 months. Hiring activity has also picked up.

The Bank of England will update its forecasts next week. When they were last published in February, the Bank expected growth of 5 per cent this year, but David Owen, chief European economist at Jefferies, said “a number of 7 per cent or more seems much more likely” now. That would be the strongest growth rate since 1941.

He added that 7 per cent was likely “even if the autumn brings with it the imposition of some additional restrictions” because the economy shrank much less than expected in the first quarter.

Jefferies real-time activity data suggested that the economy grew “over 1 per cent in March and April”, which would mean the economy shrank by less than 1 per cent in the first quarter despite lockdown. In February, the Bank predicted a 4 per cent decline between January and March. The official data will be released on May 12. Jefferies’ upgrade places it alongside Goldman Sachs and JP Morgan in predicting a rapid rebound. Goldman Sachs expects the UK to grow even more quickly than the US this year.

Most independent economists have lifted their projections for the UK since February on the back of a far more resilient economic performance than had been expected. However, GDP remains about 7 per cent below its pre-crisis high and will not close the gap until the end of the year at the earliest.

The success of the vaccine programme has been behind the surge in activity since the economy began to reopen on March 28. Restrictions have since been eased further, with bars and restaurants open outdoors and retailers, gyms and hairdressers open again.

Jefferies’ “economic activity radar” has risen to 87 per cent of pre-Covid levels, an increase of three points since last week to its highest point since March last year.

Mobility data was the biggest driver of the improvement, with an 11 point rise in public transport usage to 89 per cent of pre-crisis levels, “the highest since the start of the pandemic by a large margin”, Jefferies said. Car use was above pre-Covid levels.

Companion datasets for Europe and the US have also been strong, it said, as businesses and households prepare for more normal trading. Total job listings in the UK are at their highest point since the pandemic hit.

At its monetary policy report next Thursday, the Bank will reassess its forecasts in light of the strong recent retail sales and activity data, as well as the impact of the chancellor’s £59 billion stimulus package this year, including corporation tax super-deduction for investment in plant and machinery.

It may also update its estimate of consumer spending — it currently expects households to spend only 5 per cent of £150 billion of excess savings.