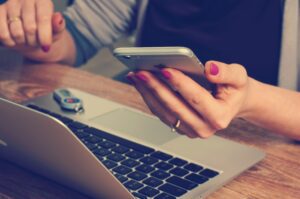 The good folks over at Freetrade, an investor app which encourages fractional shares across a wide portfolio have analysed how much investors stand to make by 2030 if they invest 10% of their average annual income (as recommended by experts) and receive the average 4.9% return on their investments every year.

The data speaks for itself …

Using this logic of 10% of earnings and based on the Office Of National Statistics data, the research shows that if both men and women started investing in 2020, men would make a £1,147 greater return on their investments. This is because the gender pay gap means women have less to invest and will therefore receive a much lower monetary return.

By 2030, with men able to invest much more than women due to their higher annual returns, the difference becomes staggering. The research estimates male investors will have made £44,123 by the turn of the next decade. For women, however, this figure is just £28,786. Overall, this means there is a £15,337 discrepancy.

Positive action in the workplace has occurred over the last five years. Dame Helena Morrissey’s 3% club for example have called to action their group of women who have tirelessly pioneered a more diverse sector across company boards. It’s been proven that the inclusion of women in MD and C sector roles can raise bottom lines. Now, with that sorted out perhaps we can again address the issue of the gender pay gap. However to do so, we need a nationwide collaboration to effect change. Therefore, is geography an issue in itself?

Which areas of the UK have the highest and lowest gap?

Using the same methodology, researchers at Freetrade have analysed how much men can make from their investments compared to women in each UK city.

The city with the highest gap between men and women is Lichfield, Staffordshire. The current gender pay gap is £17,531 there, according to the ONS, with men earning £39,910 per year and women earning £22,379.

The ten cities with the largest and smallest gender investment gaps by 2030 can be found below: 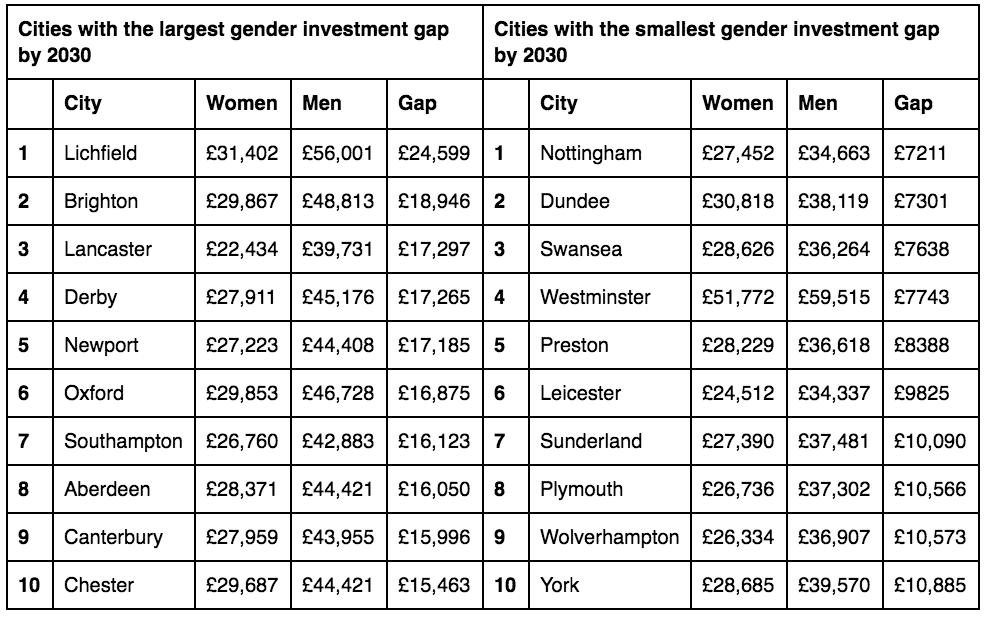 Ladies, how do you feel about this? I feel enraged. After investing in my education I work hard every week – same hours, same pay surely? I would love to invest more. Long term it takes more pressure off the government if people are wealthier and helps to disperse the upcoming pension crisis.

‘We should be investing around 10% of our income every year. With the average Brit estimated to make a 4.9% return on stocks and shares annually, it is a useful way for us to reach our financial goals and give ourselves a safety net for the future.

‘That said, Freetrade’s research has shown that women stand to make a much lower overall return on their investments than men because the gender gap in the UK means they have less to invest. This discrepancy highlights just one of the many reasons why it is imperative for employers to continue their efforts to equalise the gender pay gap.

‘These figures should not discourage women from investing as figures show the gender pay gap is closing every year. As it does, we hope women will eventually be able to see roughly equal returns from investment in monetary terms as men, so now is a perfect time to start building your portfolio’.

Is this type of app worth looking in to? In my opinion: yes. It’s competitor Wealthify has proven to be immensely popular with millenials who have also recognised the benefits of trading as opposed to picking up the minimal interest rates on savings. However Wealthify has some issues with UK downloads and useage so it’s fresh news to find an app that caters for investors looking to put in small amounts to large amounts every month to build a diverse portfolio. Of course anything like this comes with a risk, however that risk can be somewhat mitigated by your own due diligence – it’s well worth researching the companies you want to invest in before you take the plunge. If you do, please email and let me know how you found your experience.

Read more:
Female investors on average £15k worse off than men by 2030, due to gender pay gap