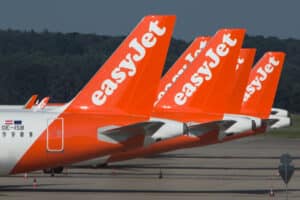 The boss of easyJet raised hopes of summer getaways for British holidaymakers yesterday.

Britain’s busiest short-haul carrier said that, based on present travel restrictions, it expected to fly up to 20 per cent of its 2019 capacity in the three months to June this year, “with an expectation that capacity levels will start to increase from late May onwards”.

The government believes that international travel will be possible from May 17, but it is not expected to decide until early next month. It is likely to make rapid Covid-19 tests compulsory for travellers to a “green list” of countries.

The situation is less clear in continental Europe, where vaccination programmes lag behind that in the UK. However, Johan Lundgren, chief executive of easyJet, said yesterday that he expected “almost all major European countries” to be open to British travellers by mid-May. He said that easyJet continued to engage with the government “to ensure that the cost of the required testing is driven down so that it doesn’t risk turning back the clock and making travel too costly for some”.

In a half-year trading update, easyJet said that it expected to report a headline loss before tax of £690 million to £730 million for the six months to March. The City consensus had been for a £752 million loss. Cash burn in the quarter to March was £470 million, better than the company’s previous guidance.

Revenue for the six months to March this year is expected to be about £235 million, down by 90 per cent compared with a year earlier, easyJet said. This comprised passenger revenue of about £165 million and ancillary revenue, such as seat and bag upgrade packages, of £70 million.

Lundgren, 54, said that easyJet had “maintained a disciplined approach to flying during the first half of our financial year. We continue to have access to significant levels of liquidity alongside easyJet’s [cost-cutting] programme, which continues to deliver.

“All of this positions us well to lead the recovery. We have the operational flexibility to rapidly increase flying and add destinations to match demand.”

Headline costs excluding fuel fell by about 59 per cent compared with the first half of last year to £845 million. This was driven by lower flying capacity and the airline’s cost-saving programme. It has raised £5.5 billion since the start of the pandemic, most of which has come from the sale and leaseback of aircraft.