MEMBERS of the Philippine Coast Guard took photos of these China-flagged ships during maritime patrol operations on April 13 at the Julian Felipe Reef using the BRP Cabra and two vessels of the Bureau of Fisheries and Aquatic Resources.

Storm Surigae to affect eastern parts of Visayas, Luzon over the weekend 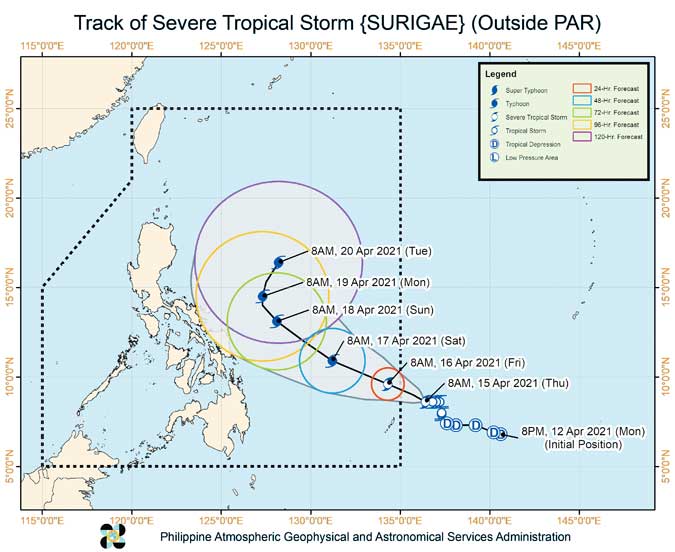 TROPICAL storm Surigae continues to strengthen as it enters the Philippine area by Thursday night or Friday morning, weather Bureau PAGASA reported. Surigae “is forecast to reach typhoon category in the next 36 hours and may continuously intensify,” PAGASA said in its bulletin. As of Thursday morning, Surigae was located 1,095 kilometers east of Mindanao and moving north-west with maximum sustained winds of 95 kilometers (km) per hour (kph). It is estimated to be 600 km east of Guiuan, Eastern Samar by Saturday morning, based on the track forecast of the Philippine Atmospheric, Geophysical, and Astronomical Services Administration (PAGASA). “The public and disaster risk reduction and management offices, especially those situated over the eastern portions of Southern Luzon and Visayas, are advised to continuously monitor for updates on this tropical cyclone. Considering the uncertainty in the track forecast of this tropical cyclone, a westward shift in the current forecast track may result in potentially significant impacts over the aforementioned areas over the weekend and onto Monday,” PAGASA said. Surigae will be assigned the local name Bising when it enters the country.

THE DAVAO City Water District’s (DCWD) head office has been temporarily closed, with all services halted, after several of its employees, mostly front office staff, were notified to isolate through the city’s contact tracing system. “We will announce definitely what is the effect, not just the due date and red bill but also the pending requests which have not yet been acted upon as well as water disconnection. We will wait for the update from DCWD on the movement of the services,” Jovana Duhaylungsod, DCWD deputy spokesperson, told media. As of Thursday, the water distributor has yet to announce an update on the resumption of operations and service adjustments. The Safe Davao QR system sends a text message to those who were in the same place at the same time as a person who tested positive for the coronavirus disease 2019 (COVID-19). “A number of our front office staff members received a text message from Safe Davao QR and most of them already undergone swab testing. Although, the results were communicated directly to the employees and we are not allowed to divulge due to data privacy act,” she said, adding that the employees were exposed last April 5 and 8. “It could be a customer (who was COVID-19 positive) because predominantly all those who received that text are our frontliners,” Ms. Duhaylungsod said. — Maya M. Padillo