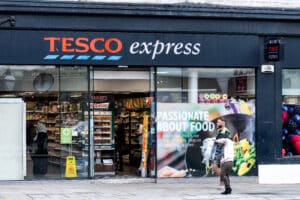 Tesco’s profits fell by almost 20% to £825m during the past year, despite growing sales and winning customers from its rivals, because of the increasing cost of operating during the coronavirus pandemic.

The retailer’s group sales rose by 8.8% to £53.4bn during the 52 weeks to 27 February, surpassing analysts’ expectations, while its UK sales increased by 7%.

The supermarket’s online sales soared by 77% during the year to £6.3bn, as it doubled its capacity for online deliveries to 1.5m slots per week.

However, Tesco incurred £892m of extra costs in the UK for doing business during the pandemic, including hiring more staff to cover employees who were off work as a result of Covid-19 or while they were self-isolating.

Tesco hired almost 50,000 temporary workers during the pandemic, about 20,000 of whom have joined the retailer permanently.

Tesco announced in December that it would repay in full £535m in business rate relief that it had accepted from the UK government. It had come under pressure to return the cash after paying out a £315m dividend to investors in October.

The group anticipates that it will continue to face about a quarter of the extra costs associated with Covid-19 during the coming year but has pledged to maintain its dividend and to continue to forgo any available business rates relief.

To deal with increased demand for online orders, the group opened a new urban fulfilment centre at its West Bromwich superstore during the year, while a second is planned for May in its superstore at the Lakeside shopping mall in Essex.

“We have strengthened our brand, increased customer satisfaction and improved value perception. We have doubled the size of our online business and through Clubcard, we’re building a digital customer platform,” he said.

The pandemic also changed customer behaviour, according to Tesco, which reported shoppers visited their stores less frequently but filled their baskets with about 50% more items during their visit.

Tesco had been “recast” in the eyes of the public, said Ross Hindle, an analyst at Third Bridge investment research firm, but challenges would remain after the pandemic.

“While Tesco’s Aldi price match strategy has been somewhat successful, the competitive threat of the discounters remains Tesco’s biggest risk. The end of the furlough scheme, a potential rise in unemployment, and inflation worries could all send shoppers back to its cheaper competitors,” he said.