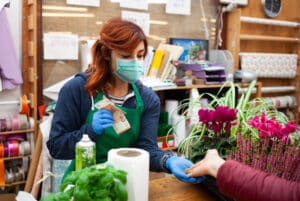 The UK economy “showed some improvement” in February after growing by 0.4%, according to official figures.

However, the Office for National Statistics said the economy was still 7.8% smaller than a year earlier, before the impact of the coronavirus pandemic.

Coronavirus restrictions remained in place to varying degrees across all four nations of the UK throughout January and February.

Goods exports to the EU partially rebounded in February after a record slump at the start of the year, the official figures show.

However imports from the EU, which also saw an unprecedented decline at the start of the year, recovered less than a fifth of the lost trade.

Britain’s trading with the rest of the world at the start of this year has been affected by additional red tape and costs following the end of the Brexit transition period, with COVID-19 restrictions and wider global economic trends also having an impact.

Commenting on the data Ulas Akincilar, Head of Trading at the online trading provider, INFINOX, said: “The bounceback is on. While many had hoped for a faster rate of growth, UK output expanded in February, and as lockdown restrictions continue to ease across the country, there’s an increasing sense of the shackles coming off the economy.

“It says much about the UK’s pent-up demand that even in February, deep in lockdown, growth returned. Manufacturing output jumped by 1.3% and construction by 1.6%, but with Britain’s dominant services sector all but flatlining, overall growth was pegged back.

“The progress may not have reversed January’s fall, but with high streets at last pulling up the shutters, from here on out the only way is up.

“With the FTSE 250 still hovering close to the record highs seen last week and wider business confidence soaring, the debate has moved on to how broad and sustainable the recovery will be – and what inflationary fallout will come with it.

“The fact is millions of Britons have built up savings during a long year of no commuting and no foreign travel. If those nest eggs are now cracked in a splurge of relief spending, inflation could soar and force the Bank of England to raise interest rates.

“But for now the markets see that threat as one to worry about tomorrow. Growth is back, sentiment is back and the focus is on picking which sectors will be the biggest winners as the UK’s deep-frozen economy thaws in the spring sunshine.”