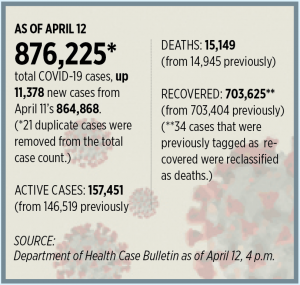 TWO of three lanes of the Skyway Extension project’s northbound section have been opened to motorists, San Miguel Corp. (SMC) announced on Monday. The northbound section that covers four kilometers from Susana Heights to Sucat in Parañaque can now be used by light vehicles like cars and vans with radio-frequency identification or RFID, SMC President and Chief Operating Officer Ramon S. Ang said in an e-mailed statement. “Our long-term solution to addressing traffic particularly on SLEX (South Luzon Expressway) heading to the Alabang area has finally been realized,” Mr. Ang said. The northbound section, which is expected to allow the additional capacity of 4,500 vehicles per hour, provides a direct link to the elevated skyway system for vehicles coming from Laguna, Batangas, and Cavite. “It allows them to bypass the Alabang viaduct, reducing congestion in the area. From SLEX, they can go directly to their destinations like Makati, Manila, Quezon City up to the North Luzon Expressway (NLEX), via SMC’s new Skyway Stage 3,” the company said. According to Mr. Ang, no toll fees will be charged for the four-kilometer segment until further notice. “We are confident that this will further reduce congestion along Edsa and usher growth to provinces in Southern Luzon and beyond,” he said. Once fully completed, the northbound section is expected to reduce travel time to NLEX to 25 to 30 minutes from two to three hours. — Arjay L. Balinbin

ENTRY to the Western Visayas Region will again be suspended from April 13 to 19 after the national task force on coronavirus response granted the request of local leaders to extend the temporary closure of borders due to rising infections. The travel ban covers all inbound flights, ships, and land transport from Metro Manila, the provinces of Rizal, Bulacan, Laguna and Cavite, and the cities of Cebu and Davao. The border closure does not include cargo and returning overseas Filipino workers. Defense Secretary Delfin N. Lorenzana, chair of the national task force, gave the approval as contained in an April 11 letter addressed to Mayor Jerry P. Treñas of Iloilo City, the regional center. “In light of the foregoing, acknowledging your recent surge in COVID-19 cases; and to give you more breathing space to prevent local transmission and protect your healthcare system from being overwhelmed, the NTF COVID-19 hereby approves your request for a temporary travel suspension,” reads part of the letter. Western Visayas is composed of the provinces of Aklan, Antique, Capiz, Guimaras, Iloilo and Negros Occidental, and the independent cities of Iloilo and Bacolod. As of April 11, Health department data show the region had 3,146 active cases out of the total 29,833 recorded since the start of the pandemic. Negros Occidental had the highest active cases at 1,317, followed by Bacolod with 456, and Antique with 389. — MSJ

Tourism workers in Metro Manila, nearby provinces get cash aid

MORE than 67,000 tourism sector workers in Metro Manila and four neighboring provinces have been given cash aid under a joint program of the Department of Tourism and Department of Labor and Employment. “We are hopeful that this financial assistance will provide some relief to our most affected stakeholders and tourism workers during these difficult times. While it may help in the short term, we believe that the best way to help stakeholders in the long run is to develop a tourism industry that is stronger, more resilient, and more adaptable to change,” said Tourism Secretary Bernadette Romulo-Puyat during Monday’s awarding ceremony for some of the beneficiaries. The 67,347 beneficiaries since last year each received P5,000. The joint program expanded the coverage of those who can avail of the financial assistance to include secondary tourism enterprises, service providers, members of  provider associations, and independent workers such as licensed tour guides. Nationwide, the Tourism department said P1.8 billion has been approved for release to 355,797 workers from establishments and associations as well as 12,321 individual workers. Application for the assistance is still open through the tourism regional offices. — Gillian M. Cortez

GLOBE Telecom, Inc. said on Monday it is setting up 200 new cell sites and adding 50,000 fiber-to-the-home lines in Batangas this year. “Globe is planning to build 200 new cell sites in Batangas this year as part of the telco’s sustained network builds, the Ayala-led telco said in an e-mailed statement. The province has 361 Globe sites, 85% of which will have additional 4G capacity, the telco added. Meanwhile, Smart Communications, Inc., the wireless arm of PLDT, Inc., announced that it has started deploying 5G technology in Virac, Catanduanes. “Smart has beefed up its 4G/LTE services and started deploying new generation Smart 5G technology in Virac, following the firing up of PLDT’s fiber optic link in the province,” Smart said in an e-mailed statement on April 8. Latest data from Speedtest Global Index by American internet testing and analysis firm Ookla showed  that the country’s fixed broadband continued to improve in March, with an average download speed of 46.25 megabits per second (Mbps), a 20.25% increase from 38.46 Mbps recorded in February. Meanwhile, mobile networks’ overall performance declined in March, with an average download speed of 25.43 Mbps from 26.24 Mbps in February. President Rodrigo R. Duterte in July last year threatened to shut down the country’s two biggest telecommunications companies if they fail to improve services by the end of the year. Hastings Holdings, Inc., a unit of PLDT Beneficial Trust Fund subsidiary MediaQuest Holdings, Inc., has a majority stake in BusinessWorld through the Philippine Star Group, which it controls. — Arjay L. Balinbin

THE REGULATORY office of the Metropolitan Waterworks and Sewerage System (MWSS) directed the two Metro Manila water concessionaires to extend the suspension of service disconnection activities until the lifting of the modified enhanced community quarantine status in the nation’s capital region. MWSS Chief Regulator Patrick Lester N. Ty said in a statement on Monday that Manila Water Co., Inc. and Maynilad Water Services, Inc. have been directed to suspend service disconnection activities, whether temporary or permanent, until lockdown measures are further eased. Meanwhile, Mr. Ty appealed to concerned local governments for cooperation and assistance to allow meter readers to continue carrying out their work. In separate mobile phone messages, Manila Water Corporate Strategic Affairs Group Head Nestor Jeric T. Sevilla, Jr. and Maynilad Head of Corporate Communications Jennifer C. Rufo confirmed to BusinessWorld that they will comply with the MWSS’ directive. Metro Pacific Investments Corp., which has a majority stake in Maynilad, is one of three Philippine units of Hong Kong-based First Pacific Co. Ltd., the others being Philex Mining Corp. and PLDT, Inc. Hastings Holdings, Inc., a unit of PLDT Beneficial Trust Fund subsidiary MediaQuest Holdings, Inc., has an interest in BusinessWorld through the Philippine Star Group, which it controls. — Revin Mikhael D. Ochave

CONSULAR offices (COs) in the National Capital Region and four surrounding provinces, collectively referred to as the NCR+ area, will work under skeletal workforce until April 30 to attend to urgent cases only, the Department of Foreign Affairs (DFA) said in a statement on Sunday. These offices in Aseana, Parañaque City, Antipolo, Dasmariñas, Malolos, and San Pablo were closed in the past couple of weeks as the NCR+ area was placed under strict quarantine level. Passport applications are being rescheduled and the new appointment dates will be sent via email. “Please be advised that the schedules may still be subject to sudden changes due to unforeseen circumstances or changes in the policies of local governments and small partners which host these COs,” it said. The DDFA Office of the Undersecretary for Migrant Workers’ Affairs will remain closed until 30 April. “This is to allow our COVID-19-positive personnel to simultaneously isolate and work-from-home, and for DFA to avoid another wave of COVID-19 infections involving its staff,” it said, adding that related concerns can be raised through its hotline and Facebook. President Rodrigo R. Duterte on Sunday eased the lockdown in Metro Manila, Bulacan, Laguna, Cavite, and Rizal until April 30, after placing the areas under enhanced community quarantine to slow down the increase in cases. — Vann Marlo M. Villegas

THE SUPREME Court has extended the directive for the physical closure of courts in all areas placed under the modified enhanced community quarantine (MECQ) level, which now includes Santiago City, and the provinces of Abra and Quirino until April 18. “(U)pon approval of Chief Justice Alexander G. Gesmundo, the provisions of Administrative Circular No. 21-2021, dated 10 April 2021, shall extend to and cover the courts in the City of Santiago, and the provinces of Quirino and Abra,” the high court said in its circular released on Sunday. In Administrative Circular No. 21-2021, the filing periods and service of pleadings and motions are extended until the seventh calendar day after the relevant court is physically reopened. Essential judicial offices will still maintain a skeletal staff to attend to urgent matters, while courts will function virtually through telephone and e-mail. Judges are also directed to conduct hearings on pending cases and other matters via videoconferencing without the need for prior permission from the Office of the Court Administrator. — Bianca Angelica D. Añago