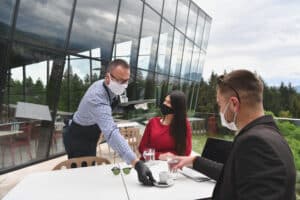 Urban areas across Britain are preparing to turn their streets into alfresco dining rooms once again, as only two in five licensed premises have permanent space to trade outdoors when lockdown eases next month.

Birmingham, Manchester and London are all preparing for temporary road closures and pavement widening to help restaurants, bars and pubs over the summer. Outdoor drinking and dining is due to be allowed from 12 April, with indoor service scheduled to resume on 17 May.

More than 60 streets in the central London borough of Westminster, which includes the entertainment district of Soho, will see a combination of timed closures and pavement widening to allow for outdoor restaurant and bar seating in the street.

In Chelsea, more than 500 additional seats will spill out across the newly pedestrianised Pavilion Road, Duke of York Square and a “pop-up” in Sloane Square over the summer, which will combine dining, drinking and entertainment.

Manchester is waiving fees for outdoor tables and chairs, and is pedestrianising streets in some areas, including the Northern Quarter, Ancoats and Deansgate.

Birmingham said it was looking at measures including temporary road closures and temporary pavement-dining licences.

The efforts come as many restaurants and pubs say they will not open next month because they will be unable to do so profitably.

About 41,100 premises in Britain have a garden, terrace, car park or other area in which they could potentially seat guests – approximately two in five of all sites, according to a study by data analysts CGA and advisory firm AlixPartners.

However, the study found that the number reopening will probably be much lower, especially if the weather is poor, because of limitations on space and the costs of equipping and staffing outdoor areas.

The outlook for businesses differs by location and type. More than 80% of community pubs have a beer garden, while casual dining restaurants are likely to be hard hit, with only 12% having outdoor space.

Des Gunewardena, the co-owner of D&D, which has about 40 restaurants across the UK including Coq D’Argent in London and 20 Stories in Manchester, said it was taking bookings for about half its sites that have terraces or outdoor space.

He said demand for tables was “phenomenal”, with 75,000 bookings for its 800 tables for the first six weeks after reopening, more than three and a half times the level taken before reopening last summer. “There is clearly massive pent-up demand,” he said. The group is unlikely to be able to turn a profit from only trading outdoors, but is keen to reopen as much as possible and get staff working again.

He suggested it should not be assumed that office workers will return to city centres in the same numbers as were present before the pandemic, while there are likely to be fewer tourists for some time.

At the other end of the market, Pizza Express said it would be able to open less than a third of its outlets for outdoor dining. Azzurri, the owner of the Ask and Zizzi pizza chains, said it would open nearly two-thirds. Wagamama said half of its venues – about 72 restaurants – will open next month.

The chief executive of Oakman Inns, Dermot King, said the company hoped to open outdoor areas at all 38 of its pubs on 12 April and that it benefited from most of them having large garden areas, which means almost half its seats are outside.

“We are quite optimistic we will be able to operate profitably at the majority of our sites or that we will be losing less money by opening than we do at the moment.”

Many other pubs and bars will find things even tougher. The bar group Loungers, for example, said it will open less than 10% of its 170-strong estate, while pub group Young’s told trade journal Big Hospitality that it was opening “in desperation”, as the limitation to two households, or up to six people meeting, would restrict trading.