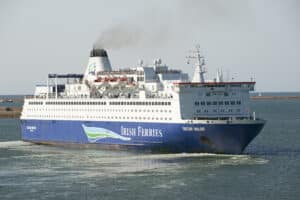 Trade between Great Britain and the Republic of Ireland in January plunged by 65% following the end of free movement of goods because of Brexit, according to new data.

The figures followed Office for National Statistics data last week that showed the UK’s overall export of goods to the EU slumped by 41% during the same period.

New customs, export and health certification requirements for goods going from Britain to Ireland have caused major disruption to the flow of cargo, with ferry companies operating on the Holyhead-Dublin Port route reporting a significant drop in traffic in January.

Figures issued on Thursday by Ireland’s Central Statistics Office showed the trade in food and live animals was hit hardest, with a 75% decline in trade, resulting in imports to the republic falling from €187m (£160m) to €62m year on year this January.

While Ireland exports large quantities of food to Britain including cheese and milk, the republic relies heavily on Britain for other goods such as milled flour, cereals and sugar.

Overall, exports from Britain to Ireland dropped from €1.4bn to €497m, with significant decreases also in mineral fuels, chemicals and transport equipment.

“Other factors identified by traders were stockpiling of goods in Q4 2020 in preparation for Brexit, substitution with goods from other countries, and a reduction in trade volumes due to the impact of Covid-19 related restrictions throughout January.”

Trade in the other direction has also been hit by Brexit and Covid restrictions.

Exports of food and live animals to Great Britain fell by 30%, with exports of machinery and transport equipment in January dropping 50% year on year.

Imports from Northern Ireland, which effectively remains in the European Union’s single market under the Brexit deal, were buoyant by comparison and increased to €177m from €161m in January last year, the CSO said.