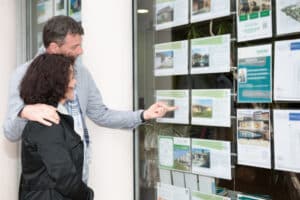 The property market for sellers is at its strongest for a decade with buyers piling in at a record pace, a survey shows.

Prices are expected to rise sharply in the coming year after the government extended the stamp duty cut and announced mortgage guarantees for first-time buyers.

This is driving a surge in inquiries from potential buyers, creating the greatest imbalance between supply and demand for ten years despite the number of new listings also rising, according to property website Rightmove.

There were more than seven million visits to the Rightmove website a day in February, up 40 per cent from the same month last year.

Tim Bannister, who is director of property data at the company, said: “Concerns of a cliff edge for the housing market at the end of March have dissipated, partly due to the tax deadline extensions in all of the UK bar Scotland, but also because the high level of buyer demand caused by the lockdowns has continued to surge since the start of the year.”

The average house price in Wales rose 8 per cent in the year to March. In England, growth is being driven by the north west, where property prices rose by 6.5 per cent. London continues to lag behind, with prices falling by 2.2 per cent over the same period. They were, however, up 0.5 per cent on the month.

A similar pattern is playing out in the rental market. A report by the estate agent Hamptons found that rents rose by 8 per cent in areas outside London last month. This was the highest figure since the index began in 2012.

By comparison, Greater London recorded a 0.2 per cent year-on-year fall last month. In inner London, rents decreased by 17.7 per cent, the largest drop since the start of the pandemic.

The momentum in the housing market is likely to continue when the government’s mortgage-guarantee scheme is introduced next month. Announced in the budget on March 3, the scheme means the government will support banks to offer more high loan-to-value deals to first-time buyers.

The stamp duty holiday, which raised the threshold for the tax to properties worth more than £500,000, was also due to end on March 31 but the deadline has now been moved to June.