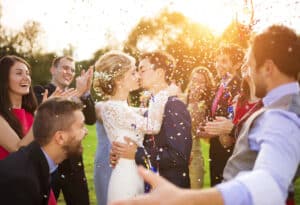 The UK is in store for an unprecedented boom in events as the industry prepares to stage hundreds of thousands of weddings and “end of Covid” celebrations when restrictions on gatherings are lifted this summer – just expect to pay 25% more than before the pandemic.

Booking for events have risen 250% compared with pre-Covid levels, after Boris Johnson announced a “cautious but irreversible” roadmap out of lockdown. The plans include a removal of all legal limits on mixing from 21 June, with large events permitted.

Enquiries about private parties, including a glut of “end of Covid” celebrations, are up 630% and there are estimated to be more than 600,000 couples jockeying to fit in their weddings by the end of next year. The rush has seen planning times shrink from the usual average of 500 days to about 140 days as the public seek to squeeze in their chosen event as soon as the restrictions are lifted.

“It feels like the start of the ‘roaring 20s’ all over again,” says Hugo Campbell, the co-founder of event booking site Feast It. “If the roadmap works out it is the start of what is going to be a number of boom years for events, people are going for it, they want to get out and make up for lost time.”

The logjam is being caused by a combination of bookings for events that were delayed last year, second events to make up for those that were held but under strict attendance restrictions, on top of the number expected in a normal year.

For example, there are about 250,000 weddings in the UK each year. In 2020, it is estimated that about 70% were postponed, which means there is a queue of nearly 700,000 new weddings expected from this summer until the end of next year.

Campbell says there have been inquiries for new categories such as a funeral event at a house or a venue to celebrate someone’s life, after strict limits on funeral attendee numbers during the pandemic.

The knock-on effect of the bookings surge and closure of a significant number of suppliers unable to ride out the event drought means that prices of the highest demand events such as weddings are likely to fuel up to a 25% price hike.

“It’s a supply and demand issue,” says Campbell. “There is a huge push on suppliers but lots have gone out of business in this time.”

The events industry has been hit harder than most sectors. While the film and TV industry has rapidly got back on its feet in large part due to the government’s £500m Covid shutdown insurance fund, the chancellor has failed to extend this to the events sector.

Following the publication of the budget last week, Julian Knight, the chair of the culture select committee of MPs, said it was “disappointing” that Rishi Sunak had again failed to extend the scheme to “provide a safety net should organisers need to cancel plans and enable more to go ahead with confidence this summer”.

The lack of insurance means that while a surge in bookings is one thing, whether they will actually be able to be staged is another.

“As it stands at the moment it is unlikely to be possible for many events to run without a government-backed Covid cancellation insurance scheme,” says Tim Thornhill, director of the entertainment division at Tysers Insurance Brokers.

“A scheme is needed to give the backing to the industry to unlock the money that flows through the supply chain.”