THE number of super-rich Filipinos is likely to grow over a five-year period in line with a global trend, the annual wealth report from real estate consultant Knight Frank said.

The number of ultra high net worth individuals (UHNWI) in the Philippines, or those with more than $30 million (around P1.5 billion), will likely increase by 35% in the five years to 2025. This after the UHNWI population dropped by 10% in the previous five years.

Globally, Knight Frank projects the population of high net worth individuals and UHNWIs to jump by 41% and 27%, respectively, between 2020 to 2025. The Wealth Report covered 44 economies.

“This year’s forecasts represent optimism for the emergence of a new economic cycle and set new expectations for the post-pandemic world,” Knight Frank said.

The number of high net worth individuals in the Philippines slipped by 3% to 13,936, while the UHNWI population dropped by 7% to 489.

The Philippines also lost three billionaires (in US dollar terms), bringing the total to 12 in 2020. Knight Frank projected the number of billionaires will return to 15 by 2025.

The decline is in contrast with a global trend maintaining a 7.1% growth in the number of billionaires between 2019-2020. The global response to the pandemic, Knight Frank said, supported the wealthy.

“With lower interest rates and more fiscal stimulus, asset prices have surged, driving the world’s UHNWI population 2.4% higher over the past 12 months to more than 520,000. The process was seen across North America and Europe, but it was Asia, with 12% growth, that saw the real upswing,” Knight Frank said, referring to countries like China and Singapore.

This expansion was not seen everywhere, “with a fall in the number of UHNWIs in Latin America, Russia and the Middle East as currency shifts and the pandemic undermined local economies.”

Countries hardest-hit by the pandemic and economies reliant on tourism also saw the number of UHNWIs decline.

Wealth inequality, Knight Frank said, would spur demand for policies that would curb such imbalance, such as wealth taxes.

WHAT IT TAKES TO BE RICH
The threshold to join the wealthiest 1% of the population varies per country, according to Knight Frank.

“This reflects rising wealth but, as elsewhere, growth is not uniform. Wealth inequality has become starker within countries and globally, particularly as a result of the COVID-19 pandemic, and this is likely to become a point of growing contention

To be considered part of the richest 0.1% in the country, a Filipino needs a net wealth of $210,000 (around P10.2 million). This is significantly smaller compared with the $10-million (around P485-million) threshold in Singapore and $10.4 million (around P504 million) in Hong Kong.

The Attitudes Survey is based on responses from more than 600 private bankers, wealth advisors and family offices representing combined wealth of more than $3.3 trillion. The survey was conducted between October-November 2020. — J.P. Ibañez 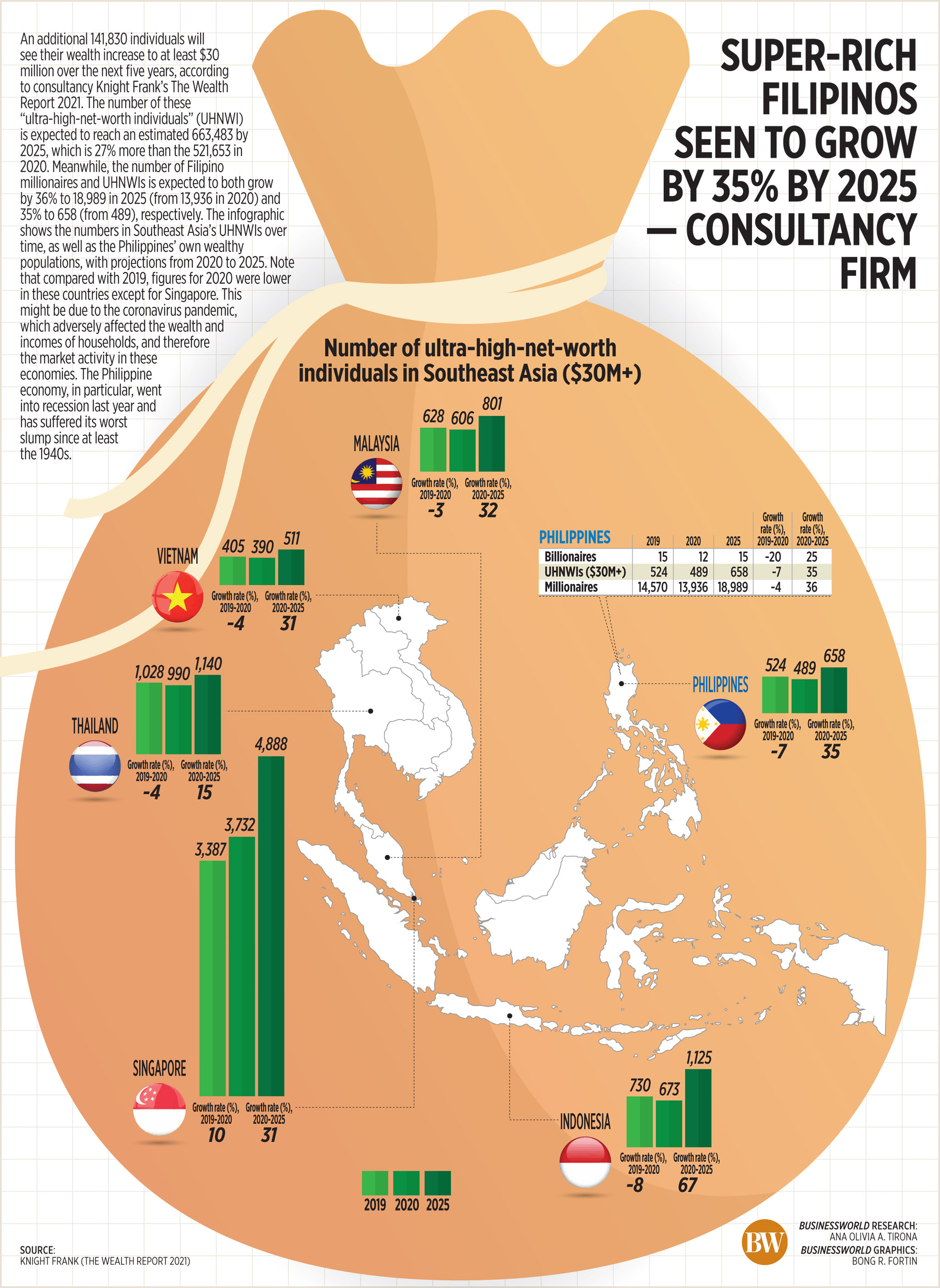