MANUFACTURING ACTIVITY in the Philippines remained in expansionary mode for a second straight month in February, as demand picked up with the reopening of more businesses, a survey conducted by IHS Markit showed.

The Philippine Manufacturing Purchasing Managers’ Index (PMI) in February was unchanged at 52.5, and remained  above the neutral 50 mark that separates growth from contraction.

The latest PMI reading was the highest in more than two years or since the 53.2 logged in December 2018. 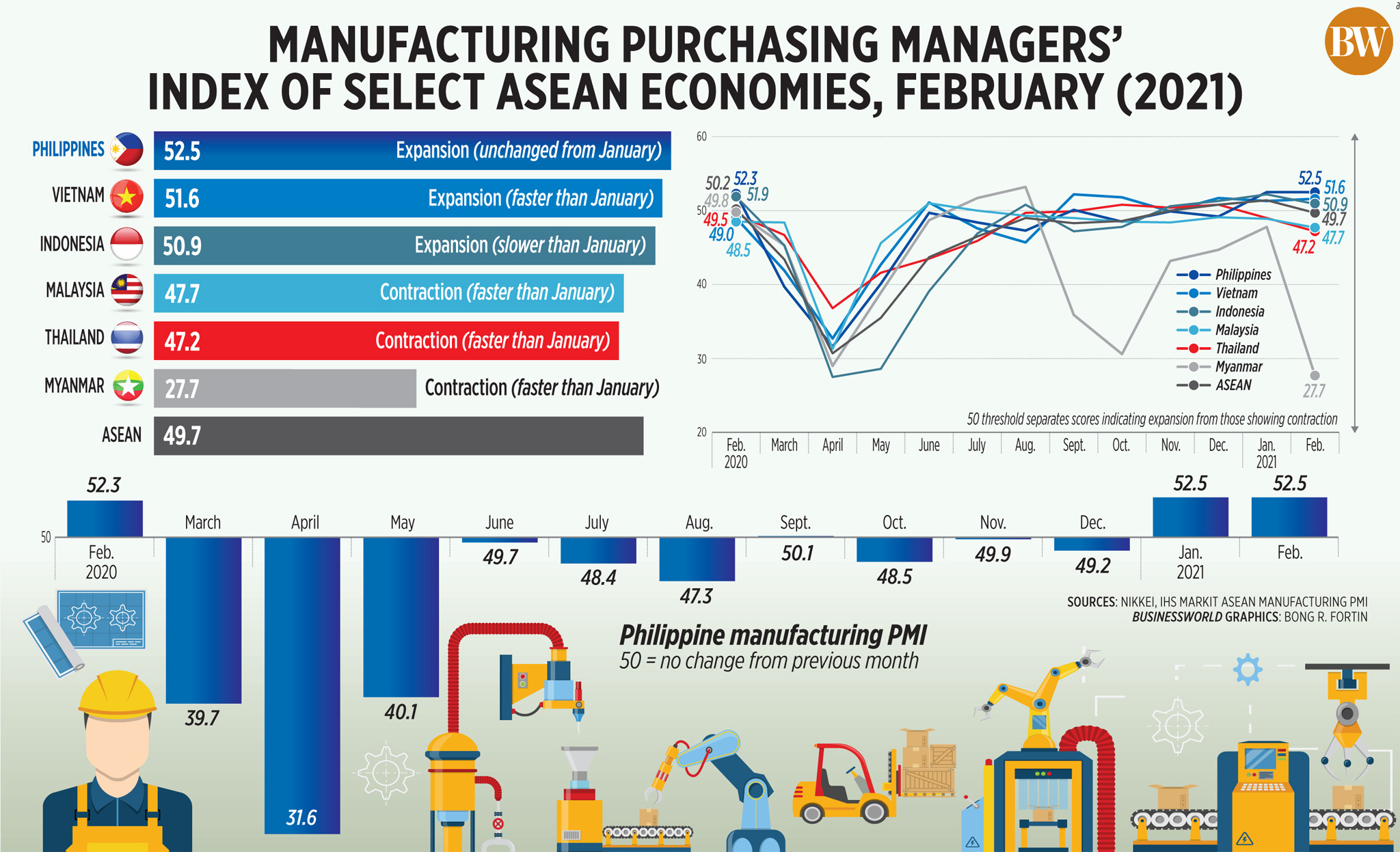 “Latest PMI data shows further progress across the Filipino manufacturing sector, with another solid overall expansion recorded during February. Output and new order growth persisted, whilst an acceleration in pre-production inventories suggests a commitment towards greater production in the months ahead,” IHS Markit Economist Shreeya Patel said in a statement.

The Philippines’ PMI reading was better than the Association of Southeast Asian Nations (ASEAN) average of 49.7, which slipped below the neutral 50 mark for the first time since October.

“The rate of decline (in ASEAN) was only slight, however, reflective of only mild reductions in both output and new orders… On the whole, the data only suggest a slight bump in the road to recovery during February,” IHS Markit Economist Lewis Cooper said in a separate statement.

OUTPUT UP
IHS noted the Philippines saw a “modest” rise in output in February, albeit softer than the pace in January. Firms noted the increase in production was supported by higher orders and strong demand.

However, IHS noted there was a drop in export orders, as the coronavirus pandemic continued to hobble demand recovery in international markets.

“COVID-19 continues to pose a large threat with material shortages and transportation delays as a result of pandemic restrictions. Exports were also hard-hit with overseas demand heavily subdued in February,” Ms. Patel said.

Companies also continued to cut jobs although it was the softest rate in a year. IHS said employment fell for the 12th straight month, mainly due to voluntary resignations and sufficient capacity.

IHS said input price inflation saw the sharpest rise since October 2018 due to shortage in raw materials. Companies indicated they will pass on the higher costs to consumers by hiking prices.

“For now, controlling the COVID-19 pandemic remains at the heart of the Philippines’ agenda, and whilst vaccines have been secured, delivery delays have severely hindered efforts to vaccinate the nation,” Ms. Patel said.

IHS said the survey also showed Philippine companies continued to have a positive outlook for the year ahead, with the degree of optimism picking up from January.

“As the Philippines continue to relax its quarantine protocols and as consumer confidence continues to kick in, we can expect this [demand for manufactured goods] to recover further,” Asian Institute of Management Economist John Paolo R. Rivera said in a Viber message.