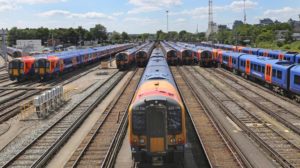 Around 10% fewer train services should run once the country opens up again, compared to the pre-pandemic timetable, the chairman of Network Rail has said.

Commuter traffic could return to 80% of pre-pandemic levels, he suggested.

“The service doesn’t run better if you put too many trains on the track. We’ve proved that,” said Sir Peter.

“You shouldn’t try to get more out of the infrastructure than it can give you. All of my experience is that people prefer reliability to journey time.”

Passenger numbers fell precipitously in March when the pandemic struck and have only partially recovered since. Many commuters are working from home and some businesses remain closed.

The government’s timetable foresees a gradual opening up of the economy over the coming months. However, some firms have already signalled some workers may continue to work from home for some of their working week.

Sir Peter said commuter traffic on the railways could remain at around 80% for the next one to three years, although he said that Network Rail, which manages the UK’s rail infrastructure, were also looking at a range of possibilities between 60% and 100%.

He warned that the working week could change so dramatically that commuter routes may only see one peak day a week and that ticketing options should be looked at to even out the service.

Leisure visits to family or for recreation could boost passenger numbers on summer weekends, he suggested.

“I used to watch the trains to the Cornish Riviera from Paddington and it was packed and we might need to get used to that again,’ he told the conference.

“If Saturday and Sunday get busy in the summer we need to do engineering work at other times.”

“We are not going back to before – this is the new normal. We now need to fundamentally change,” he said. Without a concerted cross-industry effort passengers might not return, he added.

In December, the government said it was “committed to providing a more flexible, modern ticketing system for passengers” and asked rail operators to develop flexible season tickets.

When many commuters travelled to work four or five days a week, a season ticket provided value for money. Part-time commuters currently face a much higher price per journey.

The Department for Transport expects flexible season tickets to be introduced across England later this year, which could save commuters “hundreds of pounds”.

Mr Heaton-Harris said during the pandemic passenger numbers fell to levels “not seen since the 19th Century” but everyone would work hard to restore business, and ensure a safe and clean network. He said this would require a “coherent approach, [where] innovation is needed more than ever”.

Keith Williams, whose much anticipated rail review is expected to be published soon, described the pandemic as a “Black Swan” event for the rail industry. The review had been due for release shortly before the pandemic began and has now been updated.