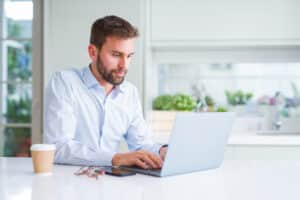 During the last two decades, Python has become really popular among IT experts working on data analysis and scientific computing.

10 years after the release of the IPython library that was meant to make the interactive Python console more scientist-friendly, the IPython Notebook was presented to the world. In just a few years IPython was already supporting more programming languages than just Python. The Jupyter project was launched – its name symbolising the 3 languages important for that project: Julia, Python and R.

What is Jupyter Notebook?

In short, Jupyter Notebook is a web application which allows users to share codes and documents. It is an open-source tool in which you can save your code, run it and even check the outcome of your programming. Using it, you can visualize data and see if the results match your expectations. It is great because it enables you to test a chosen part of the code with no need to execute it from the very beginning of the script – this is the result of writing the code in independent cells that may be executed individually. While this is not only characteristic for Jupyter, there are plenty of advantages that make Jupyter popular and hence, an often chosen tool for data science workflows.

Are there any disadvantages of using Jupyter for data science?

Writing code in independent cells (not in objects, classes, etc.) may be difficult and result in accidentally duplicating code. It is also quite hard to cooperate on code with a team and has no functionalities that help with correction of the code style. It can happen that a Jupyter user may encounter a memory error in Jupyter Notebook, but there are ways to fix this. For many users, the advantages of the Jupyter Notebook often outweigh the drawbacks

Why should you use Jupyter Notebook?

There are many reasons why Jupyter can be a good choice for your next projects, if you haven’t used it before. What you need to remember is that this tool is a kind of environment that combines code, text and images, interactive elements (like videos and animations), GUI and many other components in a single document.

It is important to mention the independence of this tool. Jupyter Notebook files are in JSON format. Created text files can be shared and converted easily – Jupyter has a special tool called nbconvert, which enables users to convert notebooks to numerous formats such as HTML, PDF and others. It also enables users to create documentation along with the code.

Jupyter Notebook is good for showcasing your project. You can simultaneously see both the code and the results of your work. Besides, the tool is easy to customize, which gives the user additional comfort during coding. It supports many languages nowadays.

To sum up, Jupyter allows programmers to run each piece of the code individually, make modifications and observe the results, so it is simply a great tool for experimenting with code.

Read more:
Jupyter Notebook for Data Science? The pros and cons of this tool