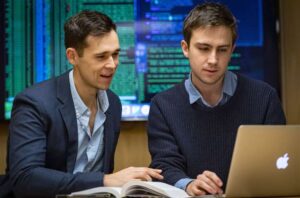 Celebrating this impressive milestone, Seamless’ founder William Beauchamp, shares with us some of the secrets of the company’s success.

Seamless Capital is an AI trading firm that uses cutting edge machine-learning algorithms to make thousands of trades per day. The team conducts groundbreaking research in machine learning and includes many scientists with ties to the university of Cambridge.

At the age of sixteen, Beauchamp, who comes from a very low income family, had made £20,000 playing online poker. By eighteen he’d made over £100,000. This fascination with using mathematics to beat games and make money independently stayed with him and after a degree in economics from Cambridge he decided to try his hand at trading. “I didn’t know much but it seemed exciting to be able to make money just by sitting at my computer and thinking, so I started working on this with a friend”. After a year the pair had lost £10,000, “My friend went off to America where he got a great job and I thought this was going to go well so I stayed at it. By the second year I was making over £100,000”.

Initially Beauchamp grew the Seamless team by hiring friends. “I pretty soon ran out of friends, so I had to make this a proper business and do things a bit differently”, he says jokingly. Today, Seamless consists of over a dozen mathematicians, physicists and engineers, most with strong ties to Cambridge university.

The secret to growth: team and culture

The team includes two former professional poker players, the best Sudoku player in the United Kingdom and many mathematicians and physicists.

“In life I like to set huge, apparently impossible goals, and then to go after them with a team of great people. This is why I get up for work every day at 5am super excited: I can’t wait to see how far we get.” says Beauchamp. “In many ways, what we do at Seamless is like the poker I was playing as a teenager: we do some maths and use our results to take risks we think are worth it. In poker I would always be doing some statistics and trying to know how likely different hands would be. Now I do the same, but with trading.”

The company has an unusual culture of total transparency: the team loves giving harsh negative feedback as they believe this is how they’ll grow. “Feedback that is painful is the most important because with pain and reflection comes growth. So we try to maximise tough feedback to help us all grow. I often have junior hires right out of university tell me I’m being silly, anywhere else this would get them into trouble but I encourage them to hold everyone to high standards”.

What’s next for the company?

Over the course of the past 8 years, Seamless has seen a tremendous growth rate, approximately doubling every 18 months. Beauchamp is optimistic but it’s hard to imagine that this could keep going:

“Last week we celebrated our first international success, we’re growing faster today than we were a few years ago. The only question is where do we want to stop, do we want to stay small and be a community of less than fifty, or do we want to be as big as possible? All our hires are very ambitious so I can’t imagine anyone saying that we should slow down”.

Seamless is a Cambridge based prop-trading firm focusing on algorithmic trading using cutting edge machine learning techniques. Seamless trades its own funds in alternative asset classes with a strong track record of success through even the most challenging market conditions.