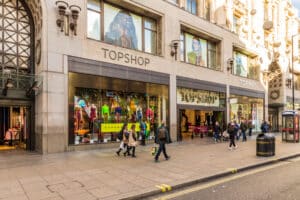 Philip Green’s Arcadia Group had a pension deficit of £510m – about £150m more than expected – when the fashion retailer collapsed in November.

In all, Arcadia Group Ltd, the parent company of Topshop, Dorothy Perkins, Burton and Miss Selfridge, owed creditors £800m when it called in administrators, according to a statement of the group’s financial affairs prepared by Arcadia’s board and sent to creditors this week.

The business collapsed after Arcadia went into a tailspin during the pandemic, following years of poor trading and high costs.

Trade creditors, including fashion and shop fitting suppliers, were owed £163m and landlords £36.5m, while tax authorities lost out on £44.2m, according to the document, which provides the best estimate of Arcadia’s debts so far. The final number could be higher – or lower – because the group is made up of several smaller companies and not all their debts flow up to the parent group.

The statement confirms that creditors are likely to receive only a small portion of the money owed.

The Green family’s Aldsworth Equity, however, is set to receive a £50m payout. The money is owed on an interest-free loan Aldsworth made to the group in 2019 at the time of an emergency restructure.

By contrast, more than 1,000 suppliers to the high street fashion chain are set to get less than 1% of the money owed to them

The worst-case scenario calculations put the combined deficit in Arcadia’s three pension schemes at £150m more than previously estimated. This is despite £100m paid into the schemes by the Green family over the past two years.

Trustees of the pension scheme said that they had since received £180m of funds from the sale of Arcadia assets – up from slightly on last week – as part of £210m in secured funds agreed under a 2019 deal between the pensions regulator and the Green family.

Those proceeds mean the scheme is on course to remain independent of the industry-backed pensions lifeboat, which caps future payouts to savers. The Arcadia trustees believe that despite the £510m deficit, they will have sufficient funds to pay more than the lifeboat can offer.

The news comes as administrators begin consultation on the closure of three Arcadia distribution centres, with the potential loss of more than 1,000 jobs. The closures include the historic Burton site in Leeds, where 400 jobs are at risk.

The site has been in operation since 1922, starting out as a factory before becoming a distribution centre for Arcadia stores including Dorothy Perkins and Burton. In its heyday the Burton factory, which opened in 1921, employed 10,000 people and produced 30,000 suits a week.

Jake O’Malley, an organiser for the GMB union, which represents workers at the site, said: “A century of history and hundreds of good jobs down the pan – while Philip Green is living it up on his private yacht and the administrators pick the bones of the business clean.

“GMB will fight tooth and nail to make sure workers get what they deserve from this mess.”