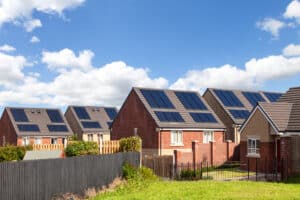 Ministers should cut VAT on repairs for electrical goods and green home improvements, to help people reduce greenhouse gas emissions in their everyday lives, an influential committee of MPs has urged.

Funding for green home grants to install insulation and low-carbon heating, should also be restored to kickstart a “green recovery” in the UK, said the environmental audit committee in a report on how to “grow back better” from the coronavirus crisis.

Philip Dunne, chairman of the committee, said ministers must do more to generate a green recovery. “The jury is still out [on whether the government will manage a green recovery],” he said. “Last spring was about keeping the UK economy in aspic, with emergency measures and funding. Now, there is more time to put together measures for the next phase. We need to see that aligned with the objectives of net zero emissions, and that remains to be seen.”

He called for the chancellor to lay out clear plans in next month’s budget to spur low-carbon growth in the runup to the vital UN climate talks, called Cop26, in Glasgow this November. “The eyes of the world will be on us for Cop26,” he said. “Rather than just preaching to other countries, we need to be seen to be taking action.”

In its report “Growing back better: putting nature and net zero at the heart of the economic recovery”, published on Wednesday, the committee said: “We recommend that the chancellor of the exchequer bring forward proposals to reduce the rate of VAT on repair services and products containing reused or recycled materials to increase the circularity and resilience of the UK economy. The government should also reduce VAT on green home upgrades to incentivise more people to install low-carbon technologies and improve the energy efficiency of new homes.”

Cuts to VAT on green goods have long been advocated by green campaigners, but VAT exemptions were limited under EU rules. Since Brexit, the UK can set all of its own VAT rates, but the government has made little indication it intends to use this to meet its net zero emissions target.

In October 2019, the government increased the VAT rate from 5% to 20% on installations of a range of low-carbon goods including many solar panel installations, especially those with batteries, as well as domestic wind turbine systems, heat pumps and insulation materials. The higher rate is charged where the cost of materials exceeds 60% of the installation cost, with exemptions for some cases of social need, such as care homes.

The committee’s recommendation is meant to correct the disparity between the zero-VAT rate on new construction and the full rate charged on retrofitting a property. However, the committee stopped short of recommending an end to VAT on all green goods, from solar panels to bicycles, called for by some campaigners.

Chris Hewett, chief executive of Solar Energy UK, a trade association, said: “Scrapping VAT for low-carbon technologies such as solar and batteries is a simple and effective way to make green home improvements more affordable for everyone. It would boost uptake, create new jobs and drive growth in Britain’s retrofitting market, which is a vital pillar in the UK’s efforts to decarbonise housing stock.”

Jenny Holland of the UK Green Building Council, said: “For too long, our VAT system has incentivised new-build over retrofit and refurbishment. Rewarding the use of recycled and reused materials will also tackle the problem that producing virgin materials is currently often cheaper than recycling or reusing products.”

Dunne said an overhaul of the green homes grant – a subsidy for retrofitting houses with insulation and low-carbon heating – was also a matter of urgency. The green homes grant was announced last summer, but the scheme has been dogged by problems, as the Guardian has revealed, and only about 5% of the £1.5bn allocated for the period to March 2021 has yet been spent. Last week, the government indicated that the unspent money would not be rolled over into the extension of the scheme for this year, prompting outrage.

Dunne called for the unspent cash to be made available in this parliament, so that at least 600,000 homes could be retrofitted to a low-carbon standard under the scheme.

Nina Skorupska, chief executive of the Association for Renewable Energy and Clean Technology, said: “The sudden removal of funding for the green homes grant would not only severely impact consumers and businesses in the short term, but would also damage confidence in future announcements. The problem with the scheme hasn’t been a lack of demand, but a combination of Covid and an administrative system which has been beset with problems.”

The committee also called for the government to begin work on a carbon tax, which would create incentives for people to choose low-carbon alternatives, and carbon border adjustments – tariffs or other barriers or penalties to the import of goods that have been manufactured with high carbon emissions overseas. The MPs also said that the Bank of England should require companies seeking bailouts to disclose their climate-related risk, and called for the Bank to align its corporate investments with the Paris agreement, but stopped short of calling for stringent green conditions to be attached to loans.

Caroline Lucas, the Green party MP, said: “The key message in this report is that investment in a green economy must be front-loaded. The government can’t keep putting off the critical policies and actions in the Micawber-like hope that something will just turn up. We need to see the investment now, and it must be in line with the temperature goals of the Paris agreement, and protect and restore nature. The forthcoming budget will be a key test of whether ministers intend to close the delivery gap between their fine words and real action.”

A government spokesperson said: “We’re committed to building back better and greener from the pandemic. We continue to bring forward bold measures to cut emissions, with plans to invest £9bn in improving the energy efficiency of buildings forming part of our wider commitment to end our contribution to climate change by 2050.”