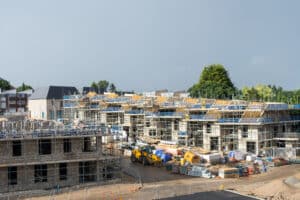 A deadline to buy a home under the current Help to Buy scheme in England has been extended to the end of May.

Covid-related delays meant more than 16,000 sales were at risk, with buyers facing large bills were purchases to fall through at the last minute.

Construction of newly-built homes, which qualify for the scheme, have been put back by as much as eight months.

Some buyers are worried that the new, two-month extended deadline will still come too soon.

In seven years, the Help to Buy equity loan scheme has allowed 278,000 households to receive an advance from the government to help pay the deposit to buy a newly-built home.

The scheme, in its current form, is coming to an end in England. However, data from Homes England obtained through a BBC Freedom of Information request showed that, as of the end of January, there were 16,691 sales still to be completed under the current scheme.

In many cases, construction workers have needed to self-isolate, supply lines have slowed, overseas labour may have needed to quarantine, and some traders have been furloughed.

Buyers face losing thousands of pounds if their properties are not built in time.

The government’s extension to the deadline – the latest of three – gives homebuilders an extra two months to complete developments. It means that purchases can be completed by the end of May.

“This measure provides certainty to developers to build out homes delayed and further protects customers whose purchases have been delayed by Covid-19,” a spokesman for Homes England said.

He added the move was aimed to ensure “those buying a home through the scheme are not disadvantaged by circumstances beyond their control”.

Greg Saunders, 31, who is buying with his boyfriend David Leith, 36, told the BBC in January that their purchase was in doubt owing to the delays.

Mr Saunders said no blame was attached to the builders who had done their best in the circumstances caused by the pandemic – but missing the deadline would have ruined their hopes of a new dream home and cost them about £2,000 in solicitor fees.

Now, following the government’s latest announcement, he said: “It’s a huge relief. It has helped me and my partner and so many other people.

“This is great news and it is good that the government is listening but this still won’t help everyone. I don’t think the extension until the end of May quite reflects the true scale of the delays facing developers at the moment.”

Andrew Montlake, managing director at Coreco mortgage brokers, said: “While Homes England have told developers there will be no more extensions, this should give builders some much needed breathing space to fully complete the property and ensure that their buyers do not miss out.

“It will be interesting to see whether or not this extension sets the scene for something similar to happen with the stamp duty holiday.”

The Help to Buy scheme, in its current form, is coming to an end in England and is being replaced by a less generous version restricted to first-time buyers which starts for new applicants at the beginning in April.

Stefanie Weingarth, 29, and Carl Young, 32, had agreed in October to buy a house near Didcot in Oxfordshire, with the help of a £112,000 Help to Buy loan. The house was supposed to be completed in late February – but Covid-related delays mean the build is at least six to eight weeks behind.

Ms Weingarth said: “It’s great news that the government have extended the deadline. Our developers are pretty certain they’ll have our home ready in time now. We’re hoping to move in mid April. It’s our first family home and we wouldn’t be able to afford it without the current Help to Buy scheme.”

She already owns a property, so the couple would be ineligible for the new scheme which is restricted to first-time buyers.

The only sticking point now is that the couple will not be able to take advantage of the stamp duty holiday, one of the reasons they decided to buy together in the first place. The tax break deadline is the end of March. As their property will not be ready until April, they now face the prospect of trying to find an extra £15,000 for stamp duty.

“It seems unfair for the government to acknowledge that there are construction days, so extend Help to Buy, but not extend stamp duty for us,” said Ms Weingarth.

Read more:
Help to Buy deadline extended to May amid Covid delays