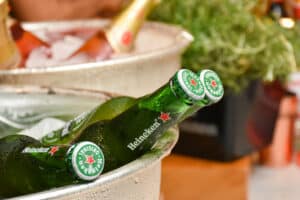 Heineken delivered a sobering set of full-year results as it announced 8,000 job cuts as part of a €2 billion cost- cutting programme over the next two years.

The world’s second-biggest brewer said it would be cutting nearly 100 British staff, or about 4 per cent of its 2,300-strong UK workforce.

The restructuring is being implemented across the business in the UK, although a spokeswoman said: “Clearly the on-trade side of the business has been more affected by the pandemic.”

The Dutch brewer has been badly hit by lockdowns and other restrictions on the on-trade — pubs and bars — putting a dent in sales volumes of beer and cider in 2020.

Its UK business recorded a jump in sales through supermarkets and shops, although this did not make up for on-trade decline. It gained market share in both channels, aided by outperformance of its non-alcoholic Heineken 0.0 lager. In its pub estate, it supported tenants with £44 million in rent cuts.

Heineken said the cost-saving scheme, dubbed project Evergreen, would make it more efficient and help productivity. About 20 per cent of jobs at its Amsterdam base will be shed in the first quarter.

The scale of the €2 billion programme surprised analysts, who had been expecting €500 million of cuts. Observers said it showed the determination of Dolf van den Brink, the new chief executive, to make his mark after something of a baptism of fire during his first year.

Heineken, which was founded in 1864, has a portfolio of more than 300 beers and ciders, including Foster’s and Bulmers. It has more than 85,000 employees and operates production facilities in more than 70 countries.

It expected Covid-related restrictions to “continue to have a material impact” this year.