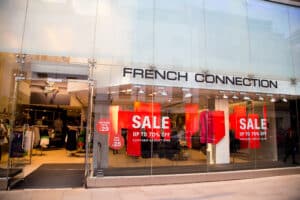 Mike Ashley’s Frasers Group has offloaded its 25% stake in French Connection to a Newcastle-based property investor after the fashion retailer’s share price shot up on hopes of a takeover.

Frasers sold its 24.1m shares for up to £3.8m on Thursday, when French Connection’s shares surged by more than a third at one point.

The unusual stock movement forced the company to announce it had received approaches from two interested parties on Friday. Shares in the company then rose by a further 90% that day, so Frasers missed out on about £3.4m in additional gains.

John Stevenson, an analyst at Peel Hunt, said French Connection was another example of an Ashley stock market investment that had “not gone brilliantly”, with the fashion group’s share price lower than it was five years ago, when he first built up the stake.

Frasers, formerly known as Sports Direct, lost £150m when Debenhams went into administration in 2019, while another investment, Goals Soccer Centre, was forced to delist after an accounting scandal.

“With hindsight, I’m sure [Ashley] would have liked to have sold at a higher price, but it is not a game-changer,” Stevenson said. “French Connection fitted quite well with [Frasers] brands, but you couldn’t see it being relinquished, so there was nowhere to go.”

French Connection formally sought a buyer in 2019 but the process was not successful, as Ashley and other interested parties were unable to secure a deal with Stephen Marks, the founder, chairman and chief executive of French Connection. Marks remains key to its future as he still owns a near-42% stake.

The Frasers Group stake was bought by the Newcastle-based businessman Apinder Singh Ghura. It is understood that Ghura, who spent years in the clothing industry before shifting into other investments including property and care homes, is not linked to either party announced as interested in buying French Connection last week. He says he does not plan to launch a bid but is leaving his options open.

He said: “We used to supply the high street but we can’t be doing that now. I like to invest in things I understand and clothing is something I have been doing for a long time. To me this is a good investment and a good brand.”

Ghura, who will already have made a paper profit of millions of pounds on the share buy, will now be key to any deal alongside Marks.

French Connection confirmed it had been approached by Spotlight Brands, with backing from the restructuring and investment firm Gordon Brothers. Spotlight has backed British brands including the fitness-focused Sweaty Betty, while Gordon Brothers acquired the Laura Ashley brand last year following its administration.

Spotlight Brands is vying against the brand investment platform Go Global Retail, which is in partnership with HMJ International Services.

Ashley’s group had been expected to take control of French Connection after beginning to build a significant stake. The retailer, which Marks founded in 1972, also owns the Great Plains brand and operates 68 stores and concessions in the UK as well as many overseas outlets. It employs about 780 staff.

The company recorded a £7.3m pre-tax loss in its last annual results on the back of at least five further years of losses.