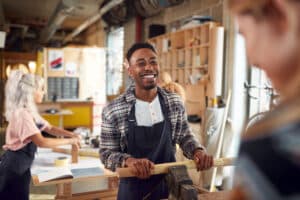 Small business owners may believe in the ethos behind apprenticeships, but many feel they lack the time, resources or knowhow to take on one themselves.

Research by the Federation of Small Businesses found recruitment, time management and facilitating the 20% requirement for off-the-job training have been the biggest challenges for SMEs.

But taking on an apprentice can also be an opportunity to address skills gaps, or diversify into a new area. And there are considerable cost-saving benefits: the government covers 95% of training costs and apprentices are paid a minimum of £4.15 an hour for their first year.

We spoke to three employers about the difference apprentices have made to their small business.

Charles Rickards and his wife Karina took over the south-west pottery company Cornishware in 2008, but it wasn’t until 2019 – as they repatriated their production process back to the UK – that they started to take on apprentices.

The company produces more than 150,000 pieces a year, each of which is hand decorated and glazed, and has seen a 110% increase in sales in 2020. Rickards has been able to meet such demand thanks, in part, to his five apprentices, and plans to recruit a further two or three in 2021. “The opportunity has appealed to artistic people who enjoy making things but don’t want to be sat in a factory all day,” he says.

Cornishware has worked with Yeovil College to find prospective candidates. They come from a range of backgrounds: some have come straight from college, others are looking for a career change – one even spent time in the anti-terrorism squad of the police force.

“It’s proved to be a brilliant way of recruiting, rather than going out to the general jobs market,” Rickards says. “It’s allowed us to tap into a really good resource of people who want to learn. They’re not coming here with any bad habits from similar industries. Personally it’s also very satisfying to teach them a skill that they’ll have for the rest of their lives.”

He says the success of an apprenticeship really comes down to the effort that both parties put into it. “Like anything in life, be well prepared,” he advises would-be apprentices. “Establish a good relationship with the training provider so they really understand the type of skills you need. And as an employer, you’ve got to put as much into it as you expect the employee to. If they think you’re just trying to get some cheap labour, the relationship’s never going to be a great one.”

It is perhaps unsurprising that Katrina Cliffe took on an apprentice as her first employee, given that she started out as an apprentice herself.

“I was 15 and had no idea what I wanted to do,” she says. “I just knew I wanted to earn money. I ended up doing a business administration apprenticeship.”

When her Huddersfield-based PR and marketing business, KC Communications, got off to a flying start in 2014, hiring an apprentice to handle less complicated tasks was the perfect solution. “It felt too soon to get someone experienced, and I had to consider cashflow,” she says. “It worked really well. I probably doubled what I expected to turn over in that first year because I had an extra pair of hands.”

She now employs a team of six, but still regularly hires apprentices. She’s found creating a formalised induction plan and allocating a member of staff to provide support has worked well, as has putting thought into finding the right candidate. “It’s not just giving a young person a job. They’ve got to be the right fit, especially if you’re a small company,” she says.

Where a lot of small businesses fail, she adds, is where they “expect apprentices to just be able to hit the ground running. You’re setting them up to fail if you do that.”

While on-the-job training is important, Cliffe has found the skills and knowledge of new technology that apprentices bring from college have been invaluable. Cliffe has even added new services to the company’s portfolio as a consequence. “For me, it’s very much a two-way street in terms of what they can bring back to the business,” she adds.

And while she admits it can be hard for a small business to think about bringing someone on who will need looking after, she does say “it’s absolutely worth it”.

Eight years after launching its apprenticeship scheme, the engineering partnership Troup Bywaters + Anders won the SME Employer of the Year category at the 2020 National Apprenticeship Awards.

The firm takes on 10 apprentices each year across its eight offices, covering a range of standards including building services, project management, HR, digital marketing and accounts.

It’s a move that has shifted the company’s culture dramatically for the better, Claire Oliver, head of HR, says. “Apprentices bring new energy to the business, a new way of thinking, particularly when they’re so technologically advanced. And it’s allowed our more senior engineers to be able to develop their management skills.”

Building a steady succession of apprentices has also created a pipeline of future leaders that have been moulded by the firm. Almost all (80%) of the firm’s current partners started off as apprentices or young recruits themselves, which shows that “there’s a real proven model of career progression for people if they want it”, Oliver says.

That’s something that many in the engineering industry have struggled with, after a decline in funded training opportunities after the 2008 recession. “There were senior engineers and junior engineers, but there was a real skills gap in the middle,” she adds.

Her advice to an SME thinking about taking on an apprentice would be to start slow, build a strong relationship with the right training provider (which doesn’t have to be local, given distance learning options) and make sure the potential apprentice understands the commitment they’re making. Then, once they’re with the business, make them feel welcome.

“Our apprentices aren’t treated differently to any other employee,” she adds. “They get the same benefits, the same biannual pay increases, the same equipment. The only difference is there’s a higher level of support around them to help them succeed professionally, academically and personally.”

Read more:
Employers on apprenticeships: ‘It’s proved to be a brilliant way of recruiting’