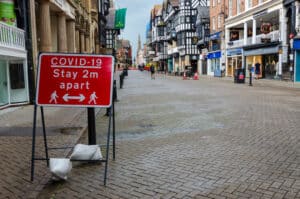 The UK Treasury is exploring options for an online sales tax in response to an explosion in internet shopping, as the Covid-19 pandemic accelerates the closure of high street shops across the country.

Officials said the Treasury was weighing changes to “shift the balance” between spending online and in physical shops, amid concerns in government over the impact for communities as more shops pull down their shutters for the last time.

Record number of shops are disappearing from high streets as repeated lockdowns and a rapid growth in online sales hammer the retail sector, threatening to permanently alter the landscape of towns and cities after Covid restrictions have been relaxed.

Ministers believe an online sales tax, which would involve a new levy on internet shopping, could help stem the collapse of the high street. Business groups including the British Retail Consortium have vocally opposed the measure, which they argue would hit high street retailers with online operations and result in higher costs for shoppers at a time of severe weakness in the British economy.

However, several big retailers, including Tesco, have previously backed the launch of an online sales tax to redress the balance. According to the Sunday Times, Rishi Sunak, the chancellor, is supportive of such a move, but would probably wait until the autumn to launch a raid on internet firms such as Amazon, Asos and Ocado, rather than using the 3 March budget.

The development comes as the Treasury considers evidence from retailers as part of a fundamental review of business rates – the system of taxing companies based on the physical premises they occupy – that is scheduled to conclude this spring. An online sales tax is being weighed as part of this work, officials said.

A Treasury spokesman said: “We want to see thriving high streets, which is why we’ve spent tens of billions of pounds supporting shops throughout the pandemic and are supporting town centres through the changes online shopping brings. Our business rates review call for evidence included questions on whether we should shift the balance between online and physical shops by introducing an online sales tax. We’re considering responses now.”

With many shops forced into temporary closure during lockdown and as shoppers stay away from high streets during the pandemic, official figuresshow the amount spent online increased by 46% in 2020 compared with a year earlier. Online spending now accounts for about 30% of overall retail sales in Britain, up from about 20% a year ago.

In a further sign of the trend, Amazon’s UK sales rose by 51% last year to a reach $26.5bn (£19.4bn) as people staying at home during lockdown turned to the retailing giant to buy goods unavailable in the closed high streets. Analysts believe a permanently higher levels of online spending could be a lasting legacy of the pandemic.

Robert Hayton, UK president of property tax at the consultancy firm Altus Group, said the pandemic meant there was a need to “address the disparity” in taxes paid by retail firms with physical shops and those operating mainly online.

He said Amazon had a “tax to turnover ratio” – the amount of tax as a proportion of revenue – of just 0.37%, compared with about 2.3% for traditional bricks-and-mortar retailers.

An Amazon spokesperson said: “We’ve invested more than £23bn in jobs and infrastructure in the UK since 2010. Last year we created 10,000 new jobs and last week we announced 1,000 new apprenticeships. This continued investment helped contribute to a total tax contribution of £1.1 billion during 2019 – £293m in direct taxes and £854m in indirect taxes.”