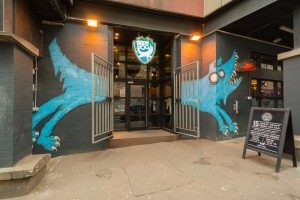 Restaurateurs and retailers are speeding towards a cliff-edge in the spring if landlords are once again allowed to evict tenants over unpaid rent, struggling firms have warned.

More than 660,000 hospitality and 170,000 retail jobs have already been lost. There are fears those numbers could rocket in April when the moratorium on evictions is due to end and companies are forced to restart business rates payments after a 12-month holiday. There is still no certainty as to when hospitality and retail operators will be able to reopen. It could be as soon as April but reports this weekend suggested that serving alcohol could initially be banned.

The removal of support is likely to exacerbate the friction between tenants and property owners. Landlords have been angered by instances of well-capitalised businesses such as Boots and JD Sports forgoing rent payments.

Among leisure chains pleading for help is the craft brewer BrewDog, which wrote to landlords last month to beg for a rent holiday extension. The company, led by chief executive James Watt, runs about 100 pubs and is losing £2m a month in its hospitality business, although it is still selling beer through grocers. Watt told landlords it had been “decimated” by Covid-19: “The plight is so severe that it is threatening to sink the entire ship.”

BrewDog has asked landlords to forgo rent until June in exchange for extending its leases for 12 months. “It’s a very fair proposal, and leaves the majority of the financial pain and heartache with us while the pubs are closed,” said David McDowall, chief operating officer. Not all landlords have been amenable. One accused BrewDog of “taking the piss”.

Industry sources suggest some companies have been taking advantage of the chaos. “Retailers will just pay less rent because they know that if the landlord kicks them out, they will have to offer a new tenant 12 months rent-free anyway,” one high-street boss said. The scale of non-payment was outlined in Bullring owner Hammerson’s results last month when it said it had collected 41 per cent of the rent it was owed in the UK for the December quarter. It is estimated there is £4.5bn of unpaid rent outstanding.

The communities secretary, Robert Jenrick, and the business secretary, Kwasi Kwarteng, must decide whether to extend the moratorium on rent enforcement, as has been done before. Restructuring experts predict a wave of store closures via company voluntary arrangements (CVAs) unless the Treasury extends the business rates holiday, which has been worth more than £10 billion.

“It is clearly a cliff-edge and some businesses will fail if nothing is done,” said the Waterstones boss, James Daunt. “The government’s failure to do anything on business rates is mind-boggling … how long can they go on year after year, wringing their hands and saying, ‘We’re thinking about it’? It’s pathetic.” He warned that Waterstones would close about 80 of its 290 shops when leases expired unless business rates were reduced.

Caffè Concerto, the patisserie chain with 20 sites in London, is launching a CVA in an effort to force landlords to accept about 20p in the pound of what they are owed. Stephano Borjak, director of the chain, said it had been left with no option after landlords lodged court proceedings.

The end of the rates holiday and the moratorium will come as the government withdraws other support. The reduction in VAT for the hospitality sector, from 20 per cent to 5 per cent, is expected to be withdrawn. The furlough scheme, which was extended just before Christmas and is being used to pay the wages of 4 million people, runs until the end of April.

The Treasury said it would outline the next stages of its “plan for jobs to support businesses and families” in the March budget: “That has been our priority throughout the past year and it will be the priority for the year to come.”

On Friday, data is expected to show the economy contracted by about 10 per cent in 2020, which would be the deepest contraction for 100 years.