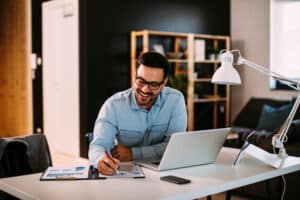 Fewer people are travelling into the office with remote working now at its most widespread since the spring, according to official figures.

About 36 per cent of working adults operated exclusively from home in the past seven days, the Office for National Statistics said. This was up from 34 per cent the week before and was the highest level since June.

The government is advising people to work from home whenever possible during the third national lockdown. The figures suggest that businesses and their employees are modifying their behaviour more than they did during the November lockdown.

The proportion of workers on furlough also edged up slightly from 17 per cent to 18 per cent as businesses, particularly those in the hardest-hit sectors, were forced to close or scale back their operations.

Although the lockdown is putting pressure on the economy, businesses appear to be weathering the latest storm better than the spring lockdown. Many companies have adapted to social distancing guidelines or have changed their business models to better meet demand. As a result, fewer businesses have been forced to close. The number of companies that said they had been trading for more than the past two weeks rose from 67 per cent to 70 per cent.

The Bank of England expects the economy to shrink by 4 per cent in the first quarter of the year. Although the country will be pushed back into contraction, the downturn is unlikely to be as severe as the 19 per cent fall registered during the first lockdown.

In its latest Monetary Policy Report, the Bank said: “The overall economic impact of lockdown is not expected to be as severe as it was in April. The proportion of businesses that have paused trading is broadly similar to June, by which time GDP had recovered over a third of the way from its April trough.”

The number of workers on furlough is also about half of what it was during the spring, when the figure peaked at almost nine million in May. This reflects the fact that more companies have remained open, but also that some businesses have already made redundancies in the intervening period.

Consumer spending has deteriorated less sharply than it did in March, when it fell to 50 per cent of its pre-pandemic average level. Credit and debit card data collected from the Bank of England show that spending increased by three percentage points in the week to 28 January. Spending is now 32 per cent below its February average.

People increased their spending on groceries and work-related purchases. They also spent more on social activities, which usually relates to travelling and eating out. Although both activities are banned under the lockdown, the uplift could reflect the fact that many of the businesses in this sector have adapted to offer new goods and services in ways that are compliant with the rules. However, spending on social activities is still 51 per cent below its pre-Covid level.