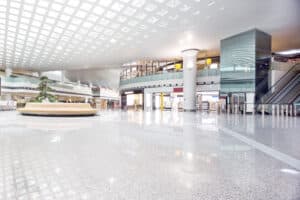 A shopping centre in Coventry that eight years ago was valued at £37 million was sold this week for only £4.9 million, setting alarm bells ringing among lenders, landlords and local authorities nationwide.

West Orchards’ importance as the city’s primary shopping destination cannot be underestimated — “It’s almost our Galeries Lafayette,” Trish Willetts, director of Coventry’s business improvement district, said, comparing it with the landmark Paris department store — but now interest in the centre is spreading far beyond the West Midlands and what, from May 1, will be the UK’s “City of Culture”.

Its biggest unit was let to Debenhams, the department stores chain that fell into administration last year. Boohoo, the online fast-fashion group that acquired Debenhams last month, is not keeping any of its stores. Other West Orchards tenants that have fallen into administration during the pandemic include Peacocks and Bonmarché, the women’s fashion chains.

The leasehold property was sold at auction to a London-based private investor by Allsops on behalf of RDI Reit. The sale, thought to be the first shopping centre transaction of the year, will inform valuations of similar assets — hence the growing consternation elsewhere. The 87 per cent discount to the purchase price in 2013, if applied to other centres, would put some landlords on course to breach covenants with their lenders.

Those lenders have been preparing for a repeat of the distress felt after the 2008 global financial crisis, which was triggered by a push into high loan-to-value commercial property lending. Modus Ventures, which developed West Orchards in 1991, collapsed in 2009 when values fell sharply, hitting Aviva, the insurer that had lent millions secured against properties.

Lloyds has quietly engaged external advisers to help with distressed borrowers. CBRE, the property advisory firm that employs Richard Dakin, who led Lloyds’ unit dealing with toxic property loans in the aftermath of the financial crisis, has been appointed to assist the bank.

Debt levels of commercial property owners are not as high as they were a decade or so ago, so a fallout on the same scale is not anticipated, but the widespread non-payment of rent during the pandemic, aided by the government’s moratorium on evictions for tenants that don’t meet rent contracts, is expected to cause some distress.

Banks have given temporary waivers to borrowers that have breached loan agreements because of rental losses. However, when borrowers stop paying interest, banks have to categorise loans differently and set aside more capital. That will force them to rethink whether they want to carry on holding those loans, or whether to call them in and take control of assets.

However, he said that lenders were not taking any visible recovery action in response just yet. Many began lending again to private commercial property investors only in 2015 and 2016. Loans typically were granted on a five-year basis and will come up for renewal this year.

Refinancing in the present market is challenging for borrowers and lenders. “The decisions that the lenders have to make are very difficult, because they can’t afford to implode their balance sheet,” Auterac said. “Do I see a flood of these things coming to the market in 2021? I think it’s unlikely. It’s too soon.”

The fall in rental income and valuations has ramifications for pension funds and local authorities, some of which have invested heavily in high street shops and shopping centres. David Ereira, restructuring partner at Paul Hastings, a law firm, said: “Already many local authorities are stretched financially and loss of occupants in commercial properties will likely see them being forced to make more cutbacks to services or declare insolvency.”

However, other analysts say the fact that West Orchards was able to find a buyer at all and attracted four bids should be seen as a positive. “It’s accepting where the market is,” George Walker, partner at Allsop, a property auctioneer, said. He expected that with new ownership, West Orchards would be “a vigorous shopping centre” two years from now. “Some investment decisions have gone wrong and some local authorities bought too early.

“We’ve been talking to people who have got these centres and are thinking of selling, or have put them on the market and can’t sell them. The client in this case was very brave and put it on at a price that was very realistic. Whether all vendors will do that, I don’t know.”