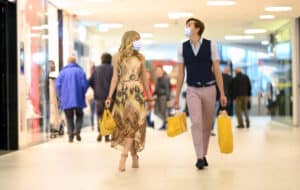 The UK’s rapid Covid-19 vaccination programme will help the economy rebound strongly this year, according to the Bank of England.

The economy is expected to shrink 4.2% in the first three months of 2021, amid tighter lockdown restrictions to slow the spread of the virus.

However, policymakers expect a rebound in the spring as people become more confident about spending.

It came as the Bank held interest rates at 0.1%.

The Bank said economic growth was expected to “recover rapidly” in 2021, with a successful vaccination programme supporting a “material recovery in household spending”.

While government support schemes are expected to limit any immediate increase in unemployment, the jobless rate is still projected to rise to 7.8% later this year as the furlough scheme winds down.

The most recent unemployment rate – for September to November – was 5.0%,

However, policymakers said the outlook for the economy remained “unusually uncertain”.

It said the rebound in economic activity would depend on controlling any new strains of the virus, as well as households’ willingness to spend.

The Bank said most people now expect “life to return to normal” within a year.

But some voluntary social distancing was likely to persist, as it has done in economies where restrictions have already been eased substantially.

In New Zealand for example, spending on restaurants and hotels has still not recovered to pre-pandemic levels.

The Bank said: “The Covid vaccination programme would be expected to lead to an easing of social distancing restrictions, reduced economic uncertainty, and higher activity, although the timing of those effects is hard to predict.”

Read more:
Bank of England predict that UK economy will rebound strongly thanks to vaccine