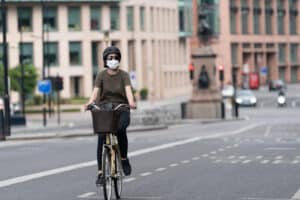 The services sector contracted last month at its fastest pace since May as businesses struggled under the strain of a third nationwide lockdown, according to a survey.

The IHS Markit/CIPS purchasing managers’ index (PMI) fell from 49.4 to 39.5 in January. This was slightly better than the 38.8 forecast by economists but still considerably below the 50 mark that separates growth from contraction.

Tight restrictions on travel, leisure and hospitality have taken their toll on the services sector, which is suffering disproportionately because of the lockdowns. Staffing levels fell for the 11th month in a row and layoffs intensified, IHS Markit said

Tim Moore, economics director at IHS Markit, said: “Service providers experienced a steep downturn in business activity due to the third national lockdown in January, although the speed of decline remains much slower than last spring.”

Britain’s economy is expected to contract in the first quarter of the year but economists are not expecting it to shrink as sharply as it did during the spring lockdown, when GDP fell by almost a fifth. Many businesses — even those in the hardest hit sectors — have adapted to social-distancing rules and have been able to continue operating during the latest lockdown.

Optimism about the vaccines is also helping to boost consumer and business sentiment. IHS Markit said that optimism about the future hit its highest level since May 2014, with 60 per cent of businesses expecting orders to improve over the next 12 months.

“While the UK economy is on course to contract sharply during the first quarter of 2021, businesses remain confident that pent-up demand and an easing of pandemic restrictions will provide a springboard to recovery later this year,” IHS Markit said.

Samuel Tombs, economist at Pantheon Macroeconomics, said: “Their optimism is warranted, given that the UK’s vaccination programme is proceeding speedily. We’re not convinced that households will spend a high proportion of the savings that they have amassed over the last year, but spending will rebound sharply anyway as households stop saving so much of their current income.”

“Accordingly, we think that GDP will have recovered to be just 2 per cent or so below its pre-Covid peak at the end of this year, a huge improvement on the likely 12 per cent shortfall in January. “