PHILIPPINE democracy remains flawed, according to the Economist Intelligence Unit (EIU), as the country slipped one place to No. 55 out of 167 countries in the London-based think tank’s democracy index last year. 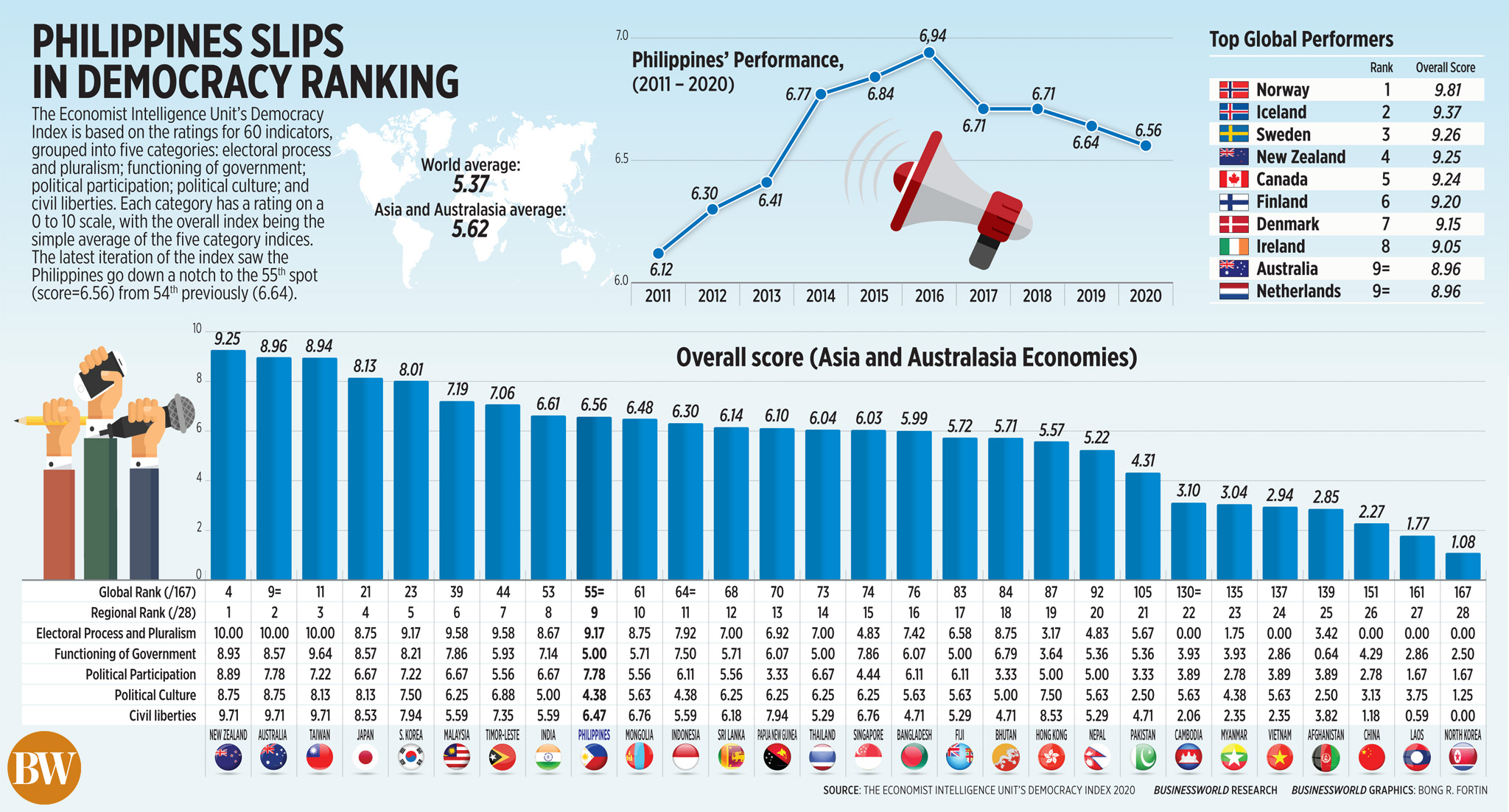 “While it appears that our country went down one spot in the said index, our status is far from being classified as a hybrid or authoritarian regime as the study is primarily based on how governments have responded to the present pandemic,” Salvador S. Panelo, Mr. Duterte’s chief lawyer, said in a statement.

“The President, with public health as his priority, opted to limit the people’s mobilization as this would slow down the spread of the COVID-19 virus, a strategy that was commended by the World Health Organization (WHO),” he added.

This does not mean that the government would stop pursuing measures and policies designed to promote a more vibrant democracy, Mr. Panelo said.

Thirteen countries in Europe were classed as “full democracies” and seven as “flawed democracies,” up from five in 2019.

Only 8.4% of the world’s population live in full democracies or countries that provide their citizens civil liberties and political freedoms as well as an effective government and political culture, according to a copy of the report.

More than a third live under authoritarian rule, many of them in China.

The 2020 average global score of 5.37 was the lowest since the index first came out in 2006, when many governments around the world restricted individual freedoms and civil liberties amid a bird flu pandemic.

“The most significant downward score changes were in the category of civil liberties, for which the aggregate score fell sharply, and in the functioning of government category,” said EIU, the research division of the Economist Group.

More than 100,000 violators of quarantine protocols were arrested in the Philippines since Mr. Duterte locked down the entire Luzon island in mid-March to contain a coronavirus pandemic.

Myanmar and Hong Kong faced the biggest country downgrades, driven by “mass voter suppression in the former and a crackdown by the authorities on dissent in the latter,” according to the report. Hong Kong was “relegated from the flawed democracy classification to that of a hybrid regime,” it added.

MILITARY ROLE
The country in June 2020 passed an extradition law that penalized secession and subversion forcing hundreds of thousands of protesters to the streets.

In mid-2020, Mr. Duterte signed a law expanding crimes against terror, which critics said could be used to violate human rights and stifle dissent.

“The lockdown restrictions and arrests of violators in the Philippines could be a factor, but there were also non-lockdown related incidents last year,” Maria Ela L. Atienza, a political science professor at the University of the Philippines, said in an e-mail.

These include unexplained deaths of drug suspects, congressional rejection of ABS-CBN Corp.’s franchise renewal and Mr. Duterte’s continuing attacks against his critics and opposition figures, she said.

Ms. Atienza also cited the growing role of the military, police and retired generals in fighting the pandemic and constant red-tagging of critics.

“Questions regarding the transparency of the government in procurement of medical and other health-related supplies needed to combat the pandemic and allegations of corruption in Philhealth and DOH were very prominent last year,” she said.

At least 188 human rights defenders have been killed under the Duterte administration, while 426 activists and community organizers were arrested, according to human rights group Karapatan.

Mr. Panelo said the Duterte administration “is committed to continue respecting the voices of all citizens, as evidenced by the endless criticisms from the political opposition, the left, as well as the government’s detractors, who have unimpeded access to both local and international press.”