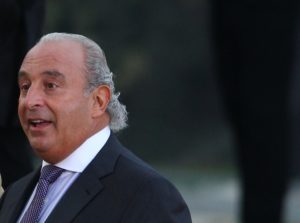 The sale of Sir Philip Green’s Arcadia empire could leave the taxpayer and the pensions lifeboat with a bill for hundreds of millions of pounds, experts have warned.

Arcadia’s pension fund has a deficit of about £300 million, some of which will be covered as the individual chains are sold off. However, experts said that the Pension Protection Fund could be left with a £200 million hit after the various deals are done.

John Ralfe, an independent pensions consultant, said: “The final Arcadia pension scheme deficit depends on how much is raised by selling each of the retail businesses and how much is owed to other creditors. Based on what we know so far, I estimate the final deficit could be around £200 million.”

Green faced calls from MPs that he should be stripped of his knighthood after the collapse of BHS in 2016 until he was pressured into putting in £363 million to help plug its pension hole.

At Arcadia, he agreed a £385 million pensions support package in 2019 with the pensions regulator, including a £100 million payment from his wife Lady Green, the ultimate owner of the business. She is thought to have made the final cash payment in December. However, it is not clear whether the Green family will honour the remaining pension commitments after the break-up and sale of the business.

Asos, the online fashion retailer, is understood to be finalising a takeover of Topshop and Miss Selfridge that would cost about £250 million plus £40 million for stock. Meanwhile, Boohoo is in exclusive talks over Burton, Dorothy Perkins and Wallis. It is understood that the online retailer could pay about £25 million for the brands.

Arcadia collapsed owing creditors £750 million. As secured creditors on a £50 million interest-free loan made to the company in 2019, the Green family will be paid before any funds are divided between suppliers, landlords and HMRC. More than 1,000 unsecured creditors stand to receive a tiny fraction of the money owed to them.

The taxpayer may also have to step in to cover a £50 million bill for redundancy payments. According to a report administrators have calculated that £47.6 million is owed in statutory notice and redundancy payments for 13,000 staff.

Very few jobs are expected to be saved as both Asos and Boohoo are interested in acquiring Arcadia’s brands and online operations rather than its 444 shops.