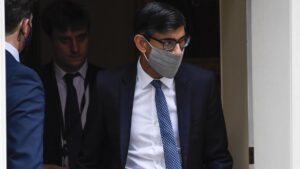 Boris Johnson and Rishi Sunak have agreed an “endemic recovery plan” to put Britain back on its feet after the immediate coronavirus crisis, as a poll reveals today that the public feels more frightened than at any time before.

A year after the first case of the coronavirus in Britain, 56 per cent of voters feel “personally threatened” by Covid, with women and the over-55s worst affected.

In an attempt to show that Johnson — who has been accused of moving too slowly on the health response — is ahead of the game in planning the economic recovery, the chancellor will use the budget on March 3 to provide a long-term blueprint that is likely to mean high state spending for a decade.

The discussion of an endemic recovery plan shows that the government is already planning for a time when the UK has to live permanently with the virus. Insiders said the “post-pandemic phase” could last “five to 10 years”.

Today’s survey, by the pollster BritainThinks, reveals that the public wants the government to use the crisis to boost the public services, pay key workers more and spread wealth more evenly around the country. Overall, only 41 per cent think the government has done as well as possible so far, whereas 51 per cent disagree.

The poll found that only 21 per cent of voters favour cutting funding to the public services to pay down Britain’s debts, with 57 per cent disagreeing.

They also want the crisis to transform the way Britain works in what some are calling an “Attlee moment” — a reference to the postwar prime minister Clement Attlee — to mirror the foundation of the welfare state after the Second World War.

About 89 per cent of voters said they wanted the post-Covid recovery spread across the country rather than focused on London, while 83 per cent said key workers should be paid more.

The government gets higher marks for the vaccination programme, with 62 per cent saying it is better than in most countries. But there is widespread scepticism that the lockdown will be lifted soon. Only 17 per cent of voters think normal life will have returned by the spring.

Sunak will use the budget to extend government relief, including the furlough scheme, business support loans, cuts in VAT — and perhaps even stamp duty — until the virus is under control. But he will also announce that those will be phased out, probably this autumn, in favour of “a plan for jobs” to kick-start employment and a “plan for growth” to promote new industries.

The basics of the recovery plan were thrashed out in a series of “supper summits” between Johnson and Sunak.

Their agreement led to the announcement last week that Johnson would set out the first “road map” for lifting the lockdown in the week of February 22.

Johnson has now ordered Treasury officials to work with the Cabinet Office on that — a move that will please Tory MPs, who have complained that No 10 has let health officials dominate the government’s response.

Officials say Johnson and Sunak “want to get the economy firing again” but will be cautious and lift restrictions slowly to avoid a fourth lockdown, which they both think would be a catastrophe for the economy. But senior sources say the planning goes much further, with the two men meeting every Friday to draw up the blueprint for life after the immediate pandemic crisis has passed.