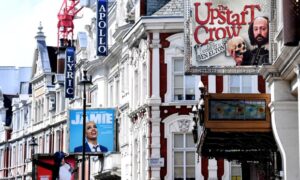 UK theatres have called for urgent clarification over post-Brexit touring provisions, warning that a failure to resolve visa rules would have “devastating consequences” for the sector.

In a letter to ministers today the all-party parliamentary group (APPG) for theatre warned that a current lack of clarity over touring rules posed a major threat to the country’s thriving performing arts sector.

In addition to visa rules, the letter said new rules on transporting items such as sets, props and musical instruments on the continent would create additional costs and delays.

It urged the government to secure an exemption for these goods and to provide financial support to mitigate the impact of higher costs and loss of work, similar to the £100m fund pledged to UK fisheries.

“As someone who worked in Europe in a life before politics, I know that there are significant opportunities for the performing arts on the continent, and we need to ensure that our domestic talent can access those,” said Giles Watling, co-chair of the theatre APPG.

“As we set out in this letter, and even with a Brexit deal, significant obstacles have emerged that threaten our world-leading performing arts exports and imports, which also puts their economic, social and cultural contributions at risk.”

It follows a major backlash from the music industry over the government’s failure to secure visa-free travel for touring artists and their crews after Brexit.

Earlier this month more than 100 British artists, including Sir Elton John, Ed Sheeran and Liam Gallagher, penned a scathing letter saying they had been “shamelessly failed” by the government.

The UK’s theatre industry contributes £10.8bn to the economy and provides major British exports with West End hits such as War Horse, Matilda The Musical and Harry Potter And The Cursed Child.

The letter was supported by industry bodies UK Theatre, Society of London Theatre, the Association of British Orchestras, One Dance UK, the Incorporated Society of Musicians and UK Music.