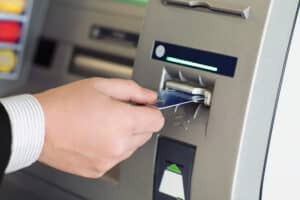 A sharp fall in cash machine usage last year has prompted a warning that more ATMs could end up being closed or imposing fees.

Link, the UK’s largest cash machine network, said its latest data showed there was a 38% decline in ATM transactions in 2020, caused in large part by the coronavirus crisis.

He told the Guardian: “ATMs are run by commercial operators and as we use less cash, if they aren’t making money on those cash machines, they will either close or become charging. We welcomed the government’s promise of legislation after it was announced in the last budget, and this is now needed urgently.”

The coronavirus outbreak has rapidly accelerated the adoption of contactless payment, and many people prefer not to handle physical money at the moment because of the potential health risks.

Howells said the pandemic “has changed our relationship with cash … Our research shows 75% say they will use less cash going forward.” But he added that millions of people still rely on cash and were not ready or able to go digital.

Link has 35 members and is a voluntary scheme, so one or more banks could in theory decide to leave if the costs were too great. Link’s interchange fee – a payment made by the card issuer to the ATM operator each time a machine is used – is about 21p a transaction.

Natalie Ceeney, the chair of the independent Access to Cash Review, said the UK was fairly unique in that it had an extensive free-to-use ATM network, plus free cash withdrawals and deposits over post office counters. “However, this is all run on a voluntary basis. If just one large bank left the Post Office agreement or the agreement with Link for ATMs, we could see this whole model collapse,” she added.

In the 2020 budget the government announced plans to introduce legislation to protect access to cash for those who need it, though the industry said it was still waiting for this.

Read more:
Cash machine use fell 38% in 2020 due to Covid contact fears