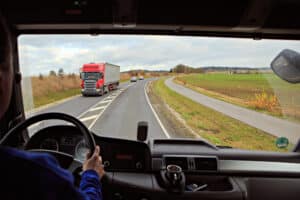 Up to half of all lorries bringing goods into Britain are returning to Europe empty as British companies put off resuming exports to the Continent to avoid getting caught by new customs regulations.

The Road Haulage Association said that freight exports were still significantly down on expected levels nearly a month after the end of the transition period.

They added that the lack of demand for freight capacity was making it harder for importers to find lorries willing to make the journey to England because trips were less lucrative than they had been in the past.

“Most of the trucks that bring goods into the UK are not British and we’ve seen a noticeable reduction in hauliers wanting to make the journey,” said Richard Burnett, the chief executive.

“There is not normal demand from exporters, which means around 40 per cent are returning to the Continent empty.

“They are also worried about being stuck in port if they don’t have the right customs paperwork. The new Covid tests are also very unpopular and are having an effect on the number of hauliers who are prepared to make the trip.”

In an article for the Times Red Box, Shane Brennan, head of the Cold Chain Federation, which represents companies shipping chilled and frozen produce, accused the government of complacency over the difficulties being faced by food exporters.

Mr Brennan said much of the food industry was “finding it very hard to trade” and said the difficulties were likely to be permanent without decisive government action.

“The UK food industry faces a massive wall at the EU border, and we need help to scale it,” he said.

“Ministers seem convinced these are ‘teething problems,’ the result of a truculent business community not believing change was coming.

“‘A business won’t make the same mistake twice’ is a common refrain in operational briefings.

“That is not my experience. Meeting new requirements for exports is not about getting one form or one process right but dozens. Buyers, sellers and the cold chain must synchronise actions precisely, and it relies on overburdened and currently inexperienced third parties like official vets and customs agents. It’s very slow going and things are getting missed.

“It is not clear how, when and if volumes will recover to what they were before.”