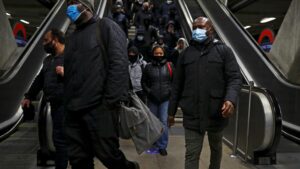 Nearly nine million people have had to borrow to get through the pandemic, with the young, the poor and parents hit worst while pensioners fared better, official figures show.

The number of adults who have taken on debt to meet living costs after a fall in income has risen steadily over the year, from 10.8 per cent in June to 17.4 per cent in December, the Office for National Statistics said yesterday.

The amounts borrowed also have risen. The proportion who borrowed more than £1,000 rose from 34.7 per cent to 45.1 per cent over the same period, as restrictions took a toll on households.

The figures show the uneven impact of the pandemic, with poorer people losing income and unable to save. “Groups that found it harder to save included those on incomes below £20,000, the self-employed and people in rented accommodation,” the ONS said.

The Bank of England estimates that UK households tucked away about £100 billion of extra savings last year while lockdowns were in place and businesses were closed, as many people were unable to spend even reduced incomes.

However, the ONS data shows that almost one in five adults were unable to save and had to borrow, underlining the widening inequalities. The self-employed were more likely than anyone to borrow more than £1,000.

The share of working adults who lost income was 43.8 per cent among the bottom fifth of earners, compared with 30.4 per cent for the top fifth. People aged under 30 and those with household incomes of under £10,000 were most likely to have been furloughed, at 35 per cent and 60 per cent, respectively.

Although one-in-three young people were furloughed, they were more likely to be able to save, possibly because they lived with parents.

In the economically inactive population, which includes pensioners and people on benefits, the reduction in income was much smaller, at 13 per cent. People over 60 were most able to afford an unexpected expense, the ONS said.

The figures came as separate ONS data revealed a sharp slowdown in household spending after a third national lockdown was imposed, confirming the risk of a double-dip recession. Spending on payment cards last week was 35 per cent below pre-pandemic levels, although the hit was not as severe as during parts of last year.

The Bank of England data, published for the first time, showed spending in the week to January 14 below the levels of the November lockdown but above levels in the first lockdown in 2020.

“Spending fell in the week following Christmas and has remained relatively low for ‘work-related’, ‘social’ and ‘delayable’ expenditure,” the ONS said.

Andrew Bailey, governor of the Bank, remains confident of a strong recovery. He said this week that “we are going to see a pronounced recovery in the economy as the vaccination programme, as it is doing now, rolls out”.

Data comes into its own at just the right time

Since the start of the pandemic, the Office for National Statistics has been producing real-time data to provide weekly snapshots of the economy (Philip Aldrick writes). These “faster indicators” have been vital for policymakers as behavioural changes, which typically happen gradually, have been huge and sudden.

Official ONS data is weeks out of date, at best, so using it for policy is like driving while looking in the rear-view mirror. To build a more accurate picture, it is using hard data and surveys such as satellite images of container shipping and Google traffic information to gauge employment, sales and solvency, as well as retail customer numbers.

The missing piece has been hard spending data. Barclaycard and Visa release regular updates, but the ONS now has access to the holy grail — Bank of England data on “CHAPS” credit card and debit card transactions. CHAPS data is the most comprehensive real time dataset on spending and this is key, as consumption accounts for two thirds of GDP. The Bank uses it to inform rate-setting decisions. The inaugural data shows spending 35 per cent below pre-pandemic levels in the week to January 14, worse than November’s lockdown but not as bad as last spring.

The data is in four categories: spending on staples, such as food and drink; delayable spending on items like clothing; work-related spending, like travel; and social spending, such as dining out. “These data represent a big step forward in our ability to see how purchasing habits change and will provide valuable insights,” the ONS said.

Read more:
Millions across the UK forced to borrow to meet their bills