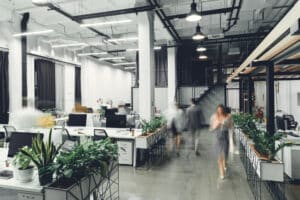 New offices and commercial properties will have to install better ventilation systems to help to reduce the spread of airborne diseases such as Covid-19, under government proposals.

Offices would have to have systems that can provide fresh air at 50 per cent higher rates than the existing minimum standards. This would enable an “increased ventilation rate to be used during a period when infection rates are raised, such as in a future pandemic”, according to the consultation documents.

Ventilation systems would also have to be able to prevent air recirculating between different rooms unless cleaning or filtering technology was in place.

All other “high-risk” new non- domestic buildings would also have to comply with standards to reduce “the risk of any potential infections being spread indoors”, under the plans. They would have to provide at least 15 litres of fresh air per person per second.

The Ministry of Housing, Communities and Local Government said in an impact assessment that the plans to require larger office ventilation systems for use in a pandemic could increase costs to office developers and the proposals could face opposition from property companies. Katie Clemence-Jackson, senior engineer at Max Fordham, a consultancy, said the proposals appeared to “demand higher capital investment from developers”.

However, Francesca Brady, chief executive of Airrated, which certifies indoor air quality, said: “Increased awareness about the link between ventilation, recirculation of air and viral transmission has led to a massive shift in occupier demands and expectations.

“Any extra costs that are incurred with improved ventilation are completely outweighed by the positive benefits, both in increased occupant health and also through productivity gains, as proven by academic research.”