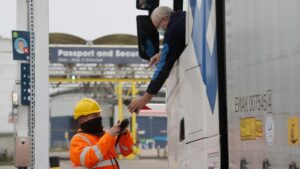 The mountain of post-Brexit bureaucracy facing Britain’s services sector could be equivalent to imposing a tariff of as much as 26 per cent, a leading investment bank said today.

The additional red tape blocking trade with European Union countries could create “non-tariff barriers” equivalent to imposing levies of between 6 and 26 per cent, UBS said.

The services industry is the engine of the British economy. It accounted for 80 per cent of economic output in 2019 and about the same proportion of jobs.

Boris Johnson’s last-minute Brexit agreement provided for zero-tariff trade with the European Union but did not exempt British companies from customs controls, paperwork and other red tape.

Services companies face new restrictions depending on the type of service they provide and the EU country they are dealing with. Further, the UK and the EU have yet to agree on new “equivalence” rules for Britain’s financial services sector, which is worth £132 billion a year, or 6.5 per cent of GDP.

Anna Titareva, an economist at UBS, said: “The new agreement has avoided a damaging imposition of tariffs. However, the increased administrative burden, to some extent softened by a number of provisions, poses risks to companies’ long-term investment and employment plans.

“Disruption to services trade stemming from non-tariff barriers could be equivalent to a tariff of anywhere between 6 per cent and 26 per cent depending on the sector. The financial services sector in particular . . . is likely to face significant changes, with the European Commission yet to make any decision on equivalence.”

“Among goods producers, we think adjustments in the automotive and food sectors, which account for close to 12 per cent of GDP and 17 per cent of employment, will be of particular importance,” UBS said.

Customs checks, the transition to the new bureaucracy and the drag from the third UK lockdown will push first-quarter GDP down by 1.5 per cent compared with the final quarter of 2020, UBS predicted. GDP is thought to have fallen by 2 per cent quarter-on-quarter in the final quarter of last year.

Read more:
Post-Brexit red tape on services ‘could be like imposing tariffs of 26%’